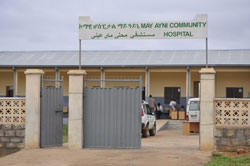 Another inhabitant of the area, Ms. Saedia Omar from Ona Watot commended the services which the hospital is offering to children and patients.
The head of the nurses in the hospital, Mr. Haile Ogbamicheal, said on his part that as part of the campaign to control malaria around 1,800 plastic bags have been handed to the inhabitants of 54 villages of the sub-zone.