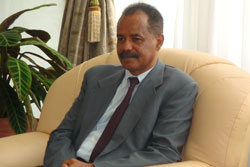 I would like to thank you for giving me the opportunity that have been late but better late than never. Last meeting, five years ago, and the exchange was bit delayed because of communication delay in time and place, and this was a good opportunity for us because accumulated topics were discussed exhaustively. And we have appreciated out partnership because we don’t have courtesies, we talk about it frankly and I believe this opportunity was a very successful engagement to talk on bilateral and multi-lateral issues and we have reinforced our commitment to work together with other partners in the region to find a better environment, a good neighborhood for every one to cooperate for the good of the people of this region. Once again if you have questions I am willing to listen to you as my brother President Musevieni has said and the floor is for you now.

Your Excellency , is your visit to Uganda signaling the change  of Eritrea’s policy towards Somalia where you have been accused of supporting Al-Sheba?

I think you have to answer your question yourself because you abused on the assumption, your assumption about Eritrea supporting Al-Shabaab. If you can provide evidences on that then I can give you an answer. If you are talking simply from your assumptions you endorse, I would like to say to you that it is not Shabaab issue, it is Somali issue. The re-constitution of Somalia is not an option. Somaliland is there, Putland is there, Mogadishu is there, Benezer land is there, Jubaland is there, we would like to see Somalia reconstituted after twenty years of disintegrated.

Your Excellency, the recent report by the UN accused you of supporting various groups that have brought instability in the Horn of Africa. What is your take on that?

It is very sad that all this fabrications have made their way to the minds of many including the media. We don’t have an excuse to use one faction. Shabaab is serving the interests of those who want to maintain the disintegration of Somalia and give al Shabaab an opportunity to flourish and broaden its influence in Somalia. They like to see that happen. It is an excuse for them to keep Somalia disintegrated and this confusion to go on indefinitely and affect the stability of the Horn of Africa and continuously use it as a pretext for promoting other agendas in the region.  Shabaab is not an issue. Somalia is the issue and that should be addressed if the United Nations is genuinely interested in bringing peace in the Horn of Africa and bringing Somalia to reconstitution;  Shabaab would be irrelevant to that ultimate goal. I don’t want to get in talks about Shabaab. You get this out of your mind. Somalia is not Shebab. This obsession about Shabaab is what causing the problem there. The main issue in Somalia after twenty years of disintegration is the reconstitution of Somalia. That is the major issue and the major concern for everyone in the region and for Somalis above anyone else. Trying to distort issues to one small faction in Somalia and compromise the integrity and the future of generations in Somalia is meaningless. I would urge everyone to revisit all that disinformation coming from here and there. They would also tell you that bombing of a hotel in Uganda, as they would like to name it, was coordinated by Asmara and was designed, planned and implemented by Eritrea. You can’t live on this distorted information. And those who are fabricating this as a matter of business for them are wasting their time.

Your country has rejoined the AU after seven years of absence and now also you are to rejoin the IGAD. Is your trip to Uganda as a last minute diplomatic stance by you and your government to rejoin the international community after isolation  and accused as one destabilizing the Horn of Africa and of course others accusing you of financing armed groups in Somalia, Sudan and Djibouti. So would you say you are under a lot of pressure and you are asking President Museveni for help?

Those who perceive there is a pressure on Eritrea are wishful thinkers. They dream of something that does not exist. No pressure can be exerted on Eritrea on fabricated lies. No one would care about that. This is sickness in my opinion of those who wishfully think of this case is happening, Shebab, bombing here, bombing there, and I come to ask the favour from my brother, President Musuveni to save my neck from all these problems, this is an illusion.

Some of your neighbors Ethiopia and Djibouti are pushing for sanctions to be imposed on Eritrea following the UN report. What is your reaction to that and does President Musuveni support your country’s cause to not impose the sanctions?

President Museveni does not support anything because the assumption that there are calls from a number of countries in the region would provoke very simple reaction. What are your evidences; make them public. Come with your evidences and prove those whether they are true or not and then people can make their judgment. Once these facts are provided transparently to any one, a president, a minister or anyone for the region, then people will have the right to respond based on factual information.  Not based on fabrications. So President Museveni would not be obliged to support our position or denying or these fabrications. He did not go to that end because it is for anyone to imagine that there is a case and there are supporters and non supporters for that case. Basically you need to prove your accusations with concrete evidences. Then people can make their judgment.
We don’t have the tradition of hijacking, kidnapping, bombing in our history. We never humiliated prisoners of war, we have never gone to hijack airplanes, we have never gone to bomb places where innocent people come; it is cowardly. It is not part of our history. And we don’t see any sense in doing that. All those who do that are against our culture and tradition; people who don’t have a case and even a cause. To simply fabricate and accumulate these lies and disseminate them to create an aura of suspicion about this or that on our credibility is totally futile. We don’t do that. We don’t resort to this cheap and damaging activity.

We are not getting distracted by such an issue, there is a major issue in Somalia. The president TSG who is now in villa Somalia was in Addis when he was ousted in 2006. He is part and parcel of the so called Islamic Courts of Somalia. The Islamic Courts, people may name them liberals or radicals, but they are all the same. And he was there and he was not recognized as a government. But we recognized him as a Somali. Abdul Kasim Salad was there as the president of another TSG, we did not recognized his government because he was not representative of whole Somalia. Abdulahi Yusuf came and we did not even recognized that. There has to be a legitimate representation with the full participation of all Somalis. People who try to focus on these negative aspects of that phenomenon and boil down the issue of Somalia into an issue of Shabaab is really distracting. Let us focus on the real issues. If Somalia could be reconstituted, if there is a viable government in Somalia with viable institutions they will take care of any terrorist organization, piracy or even the famine we see today could be managed by a viable Somali government. Somalis have resources, they can do their job well if they are allowed to reconstitute. But distracting the whole issue into one small group and creating a climate that totally distorts the focus of efforts does not make any sense. That is an issue we commonly share and we would like to see a sustainable solution to the problem without disregard those forces that are using a vacuum in Somalia for their own agenda.  That is not a priority for us at the moment. I just want to add this to clarify to all journalists here that we are not talking about Shabaab. We are not obsessed to that. We need to focus to other serious issues.

Agreed Minutes of Bilateral Consultations between the Ministerial Delegations of Uganda and the State of Eritrea, Kampala 16th – 18th August 2011