No one can break the solid ties between the Government and the people: Nationals flocking to the Homeland 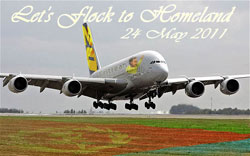 Eritrean nationals flocking to the Homeland said that nothing and no one can break the solid ties between the people and the Government.

Asmara, 29 August 2011-Eritrean nationals flocking to the Homeland said that nothing and no one can break the solid ties between the people and the Government.

The visiting nationals told ERINA that Eritreans all over the world stand alongside their people and Government, and expressed readiness to enhance their role in the nation-building.

They further explained that the main purpose of their visit to the Homeland is to spend their vacations in the midst of their respective families and witness the development drive in the country.

Mr. Berhane Tesfamariam from Sweden said that fellow nationals have been closely following up over the national media the achievements and development momentum within the framework of the integrated national rebuff.

Mr. Hassen Bekri and Mr. Hassen Adem, both from Saudi Arab, said on their part that as regards the policy of self-reliance satisfactory outcome has been registered, and called on fellow nationals living aboard to further enhance their contribution in the nation-building process.

Likewise, Ms. Hanna Haile from United States pointed out that the staunch national rebuff has foiled the anti-Eritrea conspiracy of enemy quarters.