A vision beyond meeting local demand 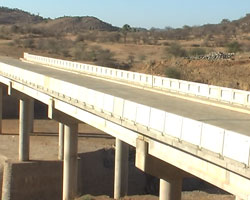 It is a general fact that cement plays a leading role in the construction industry. And ensuring of environment friendly and sustainable provision of cement and there by alleviating pressing socio-economic challenge is in fact guarantying all-rounded development of a nation. To countries like Eritrea, having a modern national cement factory is more than realizing the set out goal of economic emancipation. Adhering to the principle of self-reliance and ensuring economic stability, the country is looking ahead to improve its people’s living standards more than ever, which is mainly dependent of providing viable infrastructure in all development sectors.

Production of cement that meets the ever-increasing construction activities of the country has been of a necessity requisite.  Since cement processing requires taking of an extra caution, intensive research activities were conducted before the construction of a cement factory at Ghedem in Northern Red Sea Region. Ghedem was then identified as potent place for a construction of a cement factory for its availability of sustainable raw-materials and provision of water.

Mr. Habtemariam Fsehaye, coordinator to the project of Ghedem cement factory, said the availability of huge amount of lime stone and soft coral shells which are vital ingredients for cement production that are expected to sustain the factory for about 30-40 years, accessibility of electric supply at a near by place, and network of railway transportation as well as huge amount of water were the major factors for the selection of the site for the cement factory.

Almost all construction activities that have been carried out in Eritrea were depended on the availability of meager cement productions attained from a cement factory located near Ghergusum and mainly using imported cement.  Notwithstanding the deficits that used to hinder construction activities, the newly constructed cement factory would advance the pace of putting in place of infrastructures through out the country. Mr. Welday kidane, manager of Ghedem cement factory, said “any sort of impediments that was resulted from shortage of cement has now been solved for the availability of cement has been gradually secured throughout the county.”
Necessary precautions have also been taken to produce high quality cement which passes through intensive technical and mechanical procedures before being made available to the market.  More significantly, concerted actions have been taken to reduce environmental impact. With an aim of keeping the environment intact, the factory has introduced a pollution free technology.

Ghedem Cement Factory which started to distribute cement since June 2011 is daily producing 10,000 quintal of cement. So far, the factory has distributed a total of 110,000 quintals of cement through out the country. The

cement factory which is looking a head to extend its product line through producing varied types of cement is also exerting endeavors to nurture professionals who could operate the factory with utmost technical know-how. With this regard, about 120 youths, who joined the factory from different technical schools of the country, who are working along with the technical expertise of the factory are making due contribution to the factory’s future prospects of human power.

Since cement factory utilizes huge amount of water for the processing activities, to meet the demands of water supply, sea water distillation technology with a capacity of purifying 70 meter cubic of water per hour has been introduced.

Pointing out the primary aim of the cement factory has been satisfying people’s demand as well as producing sufficient amount of cement for varied government projects, Mr. Welday said that the availability of the raw materials with in the vicinity of the factory could sustain the factory for about 30 years if consistently produces 16,000 quintals of cement per day.

Even though local production of cement incepted during the Italian colonial era with a cement factory constructed in 1890, production was gradually deceased with the intervention of the colonial powers there by negatively affecting varied development projects. At this moment, however, there would be no delays in implementing projects due to shortage of cement but would rather finalized before or within the set out time frame.

PFDJ Statement on the Golden Jubilee of September First