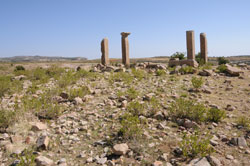 Eritrea – a young nation, possessing evidences of ancient civilization; a heritage that dates back to the creation of human kind and land gifted with fascinating features of land. Moving colors of culture, a wonderland of pleasure and a magic sea of adventure; a coastal line most suitable to scuba diving, not to mention swimming and rafting; a desert attractive for camel rides in the bright moonlight of the summer night; a fascinating countryside of landscape and vegetation, permanently forest and green; challenging mountains and slopes, risky cliffs and dykes attractive to climbers; an ideal land of explorers, the dreamland of all visitors; an enchanted land that is simply magnificent with a breathtaking highland; refreshing beaches of the tropical paradise; spectacular coral garden of the underworld heaven. It is a unique country, with a treasure of history, a hospitable people of shared smile, famous for their faith and culture, dancing in harmony with nature and one another; a diverse culture of many colors, yet united as one that no one can disperse. Home to faith and religion, the land of ancient spiritual meditation; the place of grand monuments and unique monasteries; blessed land of impressive churches, yet with history of the first mosque; land of various ethnic groups of different lifestyle and a unique tradition. Hence, Eritrea is a potential tourist destination.

As a matter of fact, tourists are welcome to enjoy the attractions. To begin with, lose yourself in the Dahlak Islands to enjoy the underwater world of a billion creatures. On your way exploring the 350 unspoiled islands, you should never miss to stay a moment in one of the hottest places on earth, the Danakil Depression with 300 feet below sea level. Hence, to the adventure tourists, there lies one of the majestic volcanoes around Dubbi of Eritrea which was created by the violent underground activity of the African Plate (Nubian) to the west and the Eurasian, Arabian, Indian, and Somalia Plates to the east. These volcanoes along with other large number of volcanoes lie along the Great Rift Valley. Also tourists may cruise down the southeastern portion of the coastal plain and enjoy the Denakil Depression, the lowest and hottest place on planet, which is also part of The Great Rift Valley. Again this depression is the site of what is known as the Alid volcano. Hence, apart from tourist attraction, researchers have assessed that the area of this volcano is a potential for possible geothermal resources, which may be used in the future to produce electricity for the country. If you happen to have more time, take the pleasure to discover the historical shipwrecks. There exist loads of wreck ships ruined during the Second World War. There also exists a bulk of Ethiopian wreck ships destroyed by the Eritrean People’s Liberation Front during the armed struggle for independence.

Hence, the historical ships in the Eritrean Red Sea are “a dream come true” to the international wreck ship diving tourist divers. Studies have discovered that the Dahlak Kebir Island in the Gubbet Musnefi t area harboring some Italian wreck ships from WWII. Some of them include: Nazario Sauro, Urania, promoeteo, Giuseppe Mazzini, Bottego …etc. Moreover, tourists are most attracted to the sandy beach of the Red Sea enjoying the wide sandy beaches and calm sea waves along the Red Sea coast; these are the safe heavens to nature-loving tourist. The Gurgusum, Buri Pennisula, Zula Bay, Mersa Gulbub, Mersa Ibrahim and Ras Kuba. Again, as you cruise back to the capital of the country take the winding route of Filfil Selemuna to explore the wildlife of the green belt forest. For this reason, for those bird lovers, and bird hunters, you will need to stay more in Semenawi Bahri (Filfi l), a few kilometers from Asmara, is protected area for the county’s national park for it is a region with numerous species of fauna and fl ora. Studies have proved that the region is rich in wildlife such as ground hornbill family bird life that includes francolins, sunbird, shrikes, canaries, turacou, serins, starling, green pigeon, oriole, barbet, robin baboon and babblers. Moreover, here and there in the cloudy vegetation of Solomuna, various love-birds, wood dove, coucal, warblers, perinea, cisticola, woodpeckers, cameroptera, crombeck, varieties of parrots, warblers, tit and hornbill are chanting and dancing together with nature. Equally attractive alternative, one may travel along the moving landscape of Nefasit Arberebue, just through the sweeping fogs and dark clouds in a steam train or a diesel one.

To test ancient archeological site dating back to 400-500 BC, one should travel to the south of the country so as to enjoy the impressive ruins of Kohaito, Tokondae, Keskese, and Belew Kelew and or Metera of Senafe. Grand monuments and striking ancient structures are still standing high in these sites. These include obelisks with inscriptions dating back to the 3rd century. Just a few miles drive, one should explore the oldest Christian Monasteries of the country including DebreLibanos, founded late 5th century by Syrian Missionary Aba Metae or Matewos. This is sited perched in the edge of a cliff of the Ham Plateau. Eritrea has more to offer to tourists in its cities and towns. The architecture includes a range of style Turkish, Egyptian, and Italian styles. The Neo-Florentine, Neoclassical Art Deco of the 1930s Italian structures is prevalent in the country. One may enjoy these structures just at a glance when strolling down town Asmara, the capital of the country.

The country’s capital itself is most of the times quoted as “the museum piece of architecture.” Asmara is situated on a plateau some 115kms away from the Red Sea port of Massawa. It stands in the cool central, and atop of the eastern escarpments. It was established early in the beginning of the 20th century with the advent of Italian colonialism in Eritrea. The city is connected with the port city of Massawa with an impressive highway zigzagging down from above 2200 meters to the sea level. It is also linked with the port with one of the World’s most amazing stem locomotive travels. The city is always admired for its majestic building styles. It is unique for it is a complete Art Deco city. It is believed to have an outstanding architectural heritage possessing the greatest concentration of the most advanced 1930s architecture in the world. It is said that in the 1940s, Asmara was one of the dazzling international modern cities in the world.

The buildings stand a living monument for the 20th century wonderful inventions. Someone strolling down the streets of the city would simply enjoy buildings that look like ships floating in a sea. Some others, such as the Fiatagliero building look like a flying jet plane. Many others buildings symbolize Guglielmo Marconi’s invention, the radio receiver. Hence, Asmara is a memory of architectural heritage of the 1920s of the Italian colonial times. Additionally, the city is special for its cleanliness and good network of transportation. The hotels or accommodations in the city are suitable for all kinds of pockets; whether it is business trip or a leisure vacation. The city is active all the nightlong; the various pubs, restaurants, bars, and nightclubs provide tourists with striking native dishes, international. Delicacies,  alcoholic drinks and beverages. More importantly, however, Asmara is loved by many as one of the most peaceful, charming, and civilized cities in the world not only for its climate and setting but also for the calm dignity of its citizens.

This is common throughout the major Eritrean cities in the country. More than anything else the security and the hospitable citizens of country make tourists feels at home. The people of Eritrea are very friendly; they have the belief that, “a guest at home is god at home.” A special test for tourists is also the sites of the liberation struggle situated in bleak mountains of the Sahel, northern angle of Eritrea. Hence one must be willing to enjoy the arduous journey across the rough terrain mountains to visit these miraculous EPLF defenses, trenches, bunkers of Nakfa, Himbol and the Roras Plateaus, and the Denden terrains. Most prominently, Eritrea is the land of important historic routes including the following international historic routes: The Holy Grail or Ark of Covenant Trail on which the Ark of the Covenant was allegedly brought
from the Middle East into Eritrea. And the Queen of Sheba Triangle that involved stopping over of the Queen in Eritrea and supposedly she gave birth to the son of Solomon in Eritrea Besides, the Route of Sahaba on which some disciples of Mohammed travelled from Mecca to Massawa and to inland of Eritrea. Hence, the magic in the country is countless; the adventure delightful; the attractions impressive; the people and their culture welcoming; their life bright and cheerful, their diversity colorful; their common factors pride and confidence; their harmony and unity, united in the same wave.

The past half century marks a period of struggle and progress characterized with historic accomplishments: PFDJ