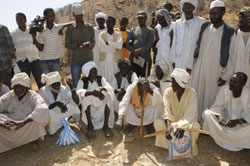 September in the Eritrean calendar is a month that signals the end of the long rain season and the beginning of a new season in which farmers eagerly await to see the fruit of their toil. The country side is covered with greenery with blossoming flowers very attractive to the eyes and the mind. With full hope that everything that is cultivated will get ripe, collected and ready for consumption for the year to come.

In the Gregorian calendar, September is the beginning of the New Year. Hence, in Eritrea September is considered by many as a new year and is celebrated with great enthusiasm and festivity.  Most importantly, September has a special place in the history of Eritrean people.  It is the beginning of that end of foreign occupation. When the Ethiopian regime, encouraged and backed by some international powers, broke the terms of the United Nations resolution condemning Eritrea to remain forcefully federated with Ethiopia, reducing Eritrea to the status of countries under occupation, the Eritrean people had to go through rigorous diplomatic efforts including sending delegations to the United Nations to request and appeal that member countries condemn and give voice to the illegal and unwarranted actions being taken by the regime in Ethiopia. All diplomatic efforts, however, received deaf ear by the international community that was supposed to stand for justice and rule of law.

The only option that the Eritrean people had to take was to take things in their own hands and every thing they could to free themselves from occupation and subjugation.  To exercise such rights there was the need of an organization or some body to initiate the resistance. On September 1, 1961, Mount Adal witnessed the birth of the long awaited signal, the beginning of Eritrean revolution for independence.

The struggle that was triggered at Adal took no time to spread to Eritrean activists living in the country and abroad. And those activists took no time to come forward and play their parts, some contributing what ever available they had in their possession to augment the struggle for liberation and others organizing themselves to physically engage themselves in the struggle to oust the enemy and put Eritrea and Eritreans in their rightful place, free and sovereign country with free people that have the right to decide its destiny.

The struggle for independence that was prompted on 1st September 1961 came to an end on May 24, 1991, with the full emancipation of Eritrea from the hands of the last colonizer, the Derg regime. The Derg regime that was considered to own the largest army in sub-Sahara Africa had no alternative but to give up and its so-called huge army remained abandoned by its leadership that fled the county to seek refuge elsewhere. To the surprise of many that used to think the Ethiopian army could with held the advances of the Eritrean liberation fighters were taken off guard into illusion of re-evaluating their stance of what happened in Eritrea and its gallant liberation fighters and its people. The posed to ask themselves, how on earth people of not more than three million could out number and devastate a large army like that of Ethiopia? They came to understand that it is not the number that matters, but the strong will and the set mind that determines the end result. Eritreans had enough suffering at the hands of successive colonizers and were determined to root out colonialism and subjugation in order to decide their own destiny and future. And that became true on May 24, 1991.

Today it is 50 years since the beginning of the armed struggle for independence. Thirty years of this half of a century, Eritreans were forced to dedicate their energy and time to free themselves from colonialism and enable Eritrea and Eritreans have their rightful place as country and people. During those thirty years the Eritrean people were forced to pay their dear life for a dear cause, independence and sovereignty. Worth to pay for restoring dignity!

When we celebrate the 50 years of the beginning of the armed struggle for independence it is with mind that the history of the Eritrean Revolution amply proved that a popular struggle for a just cause based on conscious, united and organized people is bound to triumph over a heavily armed colonial entity enjoying the support of the major powers. And determined that we build a new history out of past history so as to make use of our history as source of valuable lesson and wisdom, and thereby ensure the continuity and viability of history.
Long live Bahti Meskerem!

A vision beyond meeting local demand