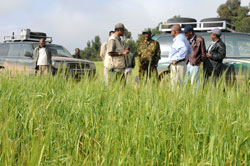 President Isaias Afwerki conducted a tour of inspection of the progress which development projects have made in Gash-Barka and Southern Administrative regions.

Asmara, 5 September 2011- President Isaias Afwerki conducted a tour of inspection of the progress which development projects have made in Gash-Barka and Southern Administrative regions.

In the course of the inspection tour in Gash-Barka, the President visited Bademit Micro-dam in Golij sub-zone that is under construction through Bidho Construction Company, during which he observed its construction process and the volume of water the micro-dam had impounded. He also exchanges views with the staff engaged in the task.

Moreover, President Isaias inspects the land cultivated by individual farmers around Kachero, Omhajer Administrative area. He also observed the implantation agricultural infrastructure facilities and the expansion of pipelines in Gerset Micro-dam, as well as the construction of bridges underway.

During his inspection tour in Tessenei sub-zone, the President visited Aligidir Micro-dam in which major construction activities were carried out over the past two years. He called on the local inhabitants in general and farmers in particular to take good care and maximum use of the major micro-dam.

Also in Haikota sub-zone, the President inspected precast sponge factory, which is nearing the stage of going fully operational.

Taking close observance of the condition of farm plots in the sub-zones of Tesseni, Golij and Barentu, and passing through the sub-zones of Shambuko and Molqi, President Isaias headed to the Southern regional Administration for a similar tour of inspection.

He observed the crop plantation in various areas in the region, especially around Mount Hisa and the Simejana plains in Senafe sub-zone, as well as those around Digsa.

In the course of exchange of views with a number of heads assigned in the respective areas prior to concluding the tour of inspection, the President called for stepped-up endeavors on the part of both farmers and implementing agencies, particularly the Ministry of Agriculture, towards achieving greater crop output through enriching soil fertility and related tasks.