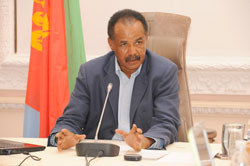 A meeting of Regional Administrators was today conducted at Denden Hall here in the capital under the chairmanship of President Isaias Afwerki.

Asmara, 6 September 2011- A meeting of Regional Administrators was today conducted at Denden Hall here in the capital under the chairmanship of President Isaias Afwerki.

The meeting held deliberations on three major agenda items, namely general assessment of the rainy season in 2011, the studies undertaken by the regional Administrations to develop animal resources and strengthening the administration of the regions.

As the reports presented at the meeting by the regional Administrators indicated, there existed fair distribution of rainfall in this year’s rainy season, and that crops in most of parts of the country are in good condition thanks to the vigorous efforts exerted by the people and government institutions. Following extensive discussion, the meeting adopted administrative action programs as regards the work that needs to be accomplished until the harvesting of crops.

The meeting further discussed the extensive and practical studies undertaken by all administrative regions in line with the directives given earlier to each regional Administration for promoting animal resources development. The reports presented at the meeting indicated that although there exists conducive ground for developing animal resources across the nation, the necessary infrastructure facilities need to be put on place on priority bases and these in a manner that would ensure the provision of animal feed and water supply, efficient veterinary service and related prerequisites. In this respect, the meeting adopted the necessary work directives.

The meeting of the regional Administrators subsequently conducted extensive discussion on the reorganization proposal put forth by the Ministry of Local Government on upgrading administrative efficiency and competence.

In additional briefings he gave on this topic, President Isaias pointed out that administrative efficiency begins from the lower level, and that provided the regional Administrations see to it that efficient administration along with the desired information system prevails, play vital role in drawing up correct and practical development programs. Besides, such imperatives make significant contribution in the implementation of programs on the part of other government institutions, the President elaborated. He further gave comprehensive explanation on the steps that should be taken by the region Administrations aimed at strengthening the technical and administrative competence of their respective staff.   Moreover, President Isaias pointed out that the task of ensuring administrative efficiency would be duly addressed from time to time.

The President gave work directives that the reports presented at the meeting concerning initial assessment of crop harvest should be presented next month in their final form, and that the action programs or plans for 2012 regarding development of animal resources about which consensus has been reached at the meeting should start being implemented as of the beginning of next November.