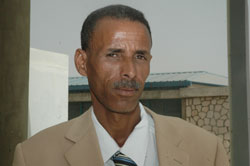 The National Association of Musicians is making preparations for the celebration of the golden jubilee Eritrean modern organized music from December 4 to 6, 2011.

Asmara, 7 September 2011- The National Association of Musicians is making preparations for the celebration of the golden jubilee Eritrean modern organized music from December 4 to 6, 2011.

The Chairman of the Association, Artist Mohammed Osman, told ERINA that the program is in line with the resolution adopted during the third congress of the association, and aims at identifing the pros and cons of music in the country that has been playing vital role in reinforcing the  identity of the nationals.

The chairman of the Coordinating Committee, Artist Asmerom Habtemariam , explained on his part that modern music was first introduced in Eritrea during Italian colonization. Later on, nationals developed it and starting from the 1960s various types of music began to be played and songs published by Eritrean citizens which also made contribution to the armed struggle for liberation.

Member of the Coordinating Committee, Artist Hiruy Gebermichael and Artist Hewan Ghebrehiwiet explained that the committee has been organizing concerts, and other shows to compare the past and the present besides highlighting the aims of the association.

Mr. Jabir Mahmoud, founding member of the Asmara Theatrical Association, said that the main purpose of the event was to explore the three stages of the history of music in the country, in addition to identifying core of Eritrean Music and pass it to future generations.

Artist Mohammed Osman called on all Eritrean musicians inside the country and abroad to share their respective experience with the young generation and play due role in enhancing Eritrean music.

Anseba region: Growth registered in participation of students and expansion of schools