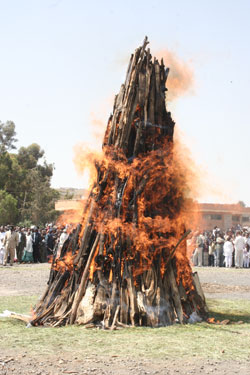 When it comes to the Geez New Year, people and especially foreigners, get confused about the notion of celebrating New Year in September. The fact remains while officially Eritrea follows the Gregorian calendar (GC); the elders usually stick to the Julian calendar for traditional and religious holidays. According to the Julian calendar, the year, which starts in September, is divided into 12 months of 30 days each and a 13th month, known as Pagumien (a Greek word meaning addition) of 5 days and 6 days in leap years (like the present year). Coming at the end of the rainy season, Pagumen is rightly referring to the fact that Eritrean tradition dictates that bathing your bodies during the Epagomenal days in any water source is vital to keep one’s health throughout the coming year. It is considered as cleansing one’s soul from any sins committed the past year and ensuring a healthy journey throughout the coming year.

Back in the old days, everyone, except for the ill and aged, bathed their bodies.

Particularly in the Eritrean highlands, women wake up early in the dawn hours to bathe in the village ponds and rivers. The elders I consulted about the traditional significance of this norm say that it symbolizes the cleansing of the body and soul in time for the New Year. In old times, except the mobility impaired and very old people, everybody reportedly bathed each morning during the epagomenal days.
Melodious folksongs by the young women as they bathe or play in the meadows are abundant these
days.

Roughly translated this goes as: “Mother, please put the light on for me to fetch water.” This is an allusion to St. Mary, inferring that the young women are asking St. Mary to allow them wash themselves of their sins. The Geez New Year, which is commonly known as Kudus Yohannes, in honor of John the
Baptist, entails a range of other colorful activities. The days leading up to the big event, young girls go out in the streets with their little drums singing laudatory songs to passersby who in return give them some money. That’s probably fundraising at the traditional level. Particularly in the rural Eritrea, the girls, with the money collected, supposedly buy decorations to make themselves more beautiful for the New Year. At dusk on the eve of the day, the streets are filled with smoke (or its smell) from the burning torches, made of bundles of dry leaves and thick wood sticks that children carry around the neighborhood chanting “Hoye Hoye.”

Growing as a child I remember looking forward to our relatives who would come from the village – honestly what we wanted most were the torches they would bring us. And then on the eve, we would get restless until it got dark so we could light our torches and run along the street. Tradition has it that you lay the burning torch on the ground and makes people cross it three times, wishing for blessed and prosperous returns of the day. Once they cross three times, people are supposed to give the children small tips. After we had made a round in our block and make as many people as we could find cross our torches we would make our way back home, where the family gathers in the compound. My grandmother, who loved to stick to tradition, would then pick one of the torches and go around every room and, shall we say fumigate them, reciting some verses that supposedly wish for prosperity with the coming the New Year:

The wish, in simple words, would sound something like: “Begone, vegetable dish Welcome porridge of butter…” As silly as they may sound, the verses are simply good wishes of wealth and abundance for the New Year.

When she was done with touring all rooms in the house, we would all gather around a small bonfire made from what remains of the torches. Our grandmother would then sing traditional New Year folksongs. And boy, that was a lot of fun! Such traditions make up an important part of the rich Eritrean cultural heritage. Even today, as I listen to the songs on the radio or television, my mind goes back to those smoke-filled evenings that we, as children, would eagerly await. The Geez New Year is generally considered as a fresh beginning and remains to this date the most important of the Eritrean traditional holidays.

Iin four days time, as this year is the one before the Gregorian leap year, we will be celebrating the Geez New Year.

Illogical Conclusion: Not Only Misleading But Also Wishful Thinking