Illogical Conclusion: Not Only Misleading But Also Wishful Thinking 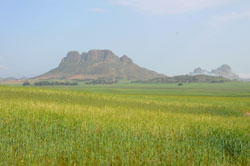 Logic is the science that investigates the principles governing correct or reliable inference. Any conclusion made based on scientific investigation and by relying from fact on the ground has the potential of being accepted as true and sound. All human beings walk with two legs, Haile is a human being, there fore Haile walks with two legs. This argument is based from scientific creation of all human beings and unless by accident or otherwise one person is having one leg or no legs is outside of that scientific explanation of human being.

All Americans are white, Richard is an American, there fore Richard is white is logically wrong. There are Black, Asian, Native Americans and Amerindians with different skin color. This kind of unfounded and random conclusion is misleading. Any person that makes such kind of conclusion is either ignorant who does not know the demography of that country or innocent who thinks that America is the land of whites. Or for that matter, to conclude that in America there is presidential election every four years, all Americans come to the poll stations and elect their president democratically. Is this logical? Such kind of people who come forward with such conclusion are people who have never read the history of American elections where the deciding elements are the interest groups. This kind of conclusion is also misleading or propagating the grandiose of America as a leading democratic country.

It has been common in to day’s world to observe political conclusions made and historical political actions executed, through different means including going to war, from unfounded and baseless arguments. In order to justify their argument they commonly used major media outlets to serve them as a mouthpiece for defamation and portray things as if they are existing on the ground.  Distorting events to satisfy the wishful thinkers so that they use it as a justification to take what ever measures they want to take is every days phenomena in the history of the world. The unfounded allegation of Weapons of Mass Destruction in Iraq is a case in point. Their hatred of their long years ally Saddam Hussein and the hysteria of the 9/11 incident intimidated them to write a drama to justify their later action to go to war in the name of fighting terrorism. They presented false documents to the table of the international community and tried to convince them that Iraq is a dangerous country and its leader is insane that has to be removed. The logic they used to convince the world and their people was based on created false information but in a way that it convinced many those who supported the action they later took. Action taken from false and unfounded information has no truth in it and it back fires. That is what we are observing in Iraq to day. Non ending war and destruction.

The illogical logic we were hearing about the drought in the Horn of Africa is part of the pattern of their lies.  The illogical logic they talk about is that, the Horn Africa is hit by drought; people in Somalia, Kenya and Ethiopia are on the verge of death, hungry. Eritrea is located in the Horn of Africa, therefore, the people of Eritrea are going hungry. Wishful thinking! One wanders to why they look very much concerned of the people in the region. Are they really acting humanely to save the lives of those they say are hungry? Or has it some kind of motive behind? And why are they insisting countries to accept their verdict while the countries say other wise. A country like Eritrea has ever since stood firm for its stance of self-reliance. “We don’t need handout! We want to develop our country with our toil. We want to have to ownership of our projects and work in partnership”. Isn’t this a noble idea every developing country should follow?

The rainy season of 2010 was abundant and the harvest was equally very satisfactory. This year’s rainy season is also not much different from that of last year. The harvest of this year is also expected to be good and farmers are busy preparing to collect their harvest.

The illogical logic from some quarters about drought in Eritrea is, therefore, contrary to the reality existing on the ground in the country. So their conclusion emanates only from wishful thinking. I think it is high time that people try to be logical and reasonable. Otherwise a kind of conclusion “The earth is round because Magellan told us he sailed around it” will take us nowhere.

Efforts made to unite ELF and EPLF forces