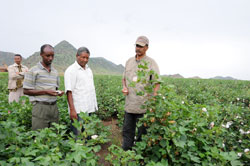 President Isaias Afwerki conducted a tour of inspection in Gash-Barka Region on September 2 during which he observed the progress of the overall development programs in general and prospects of the promising crop yeild.in particular.

The significance of road networks and linking bridges is not to be viewed lightly. Bridges so far constructed in the Gash-Barka Region and particularly along the Barentu-Teseney road indeed attest to the can-do sprit of Eritreans. A strategic bridge along the Barentu-Teseney road which took a considerable time during construction was fully finalized on president’s arrival. After looking over the construction of the bridge, he headed to Haykota sub-zone.

Foam factory is among the factories that have been instituted in Haycota sub-zone that are in full swing to begin production. The foam factory which is constructed by Ghedem Construction Company on 4,500 meter square is on the verge of producing foam that suit with all climatic conditions of the country at a fair price. The factory is also expected to minimize financial expenses, workload, and time constraints that were encountered during constructing houses.

Having shared views with an expert in the factory regarding the speedy finalization of the plant and commencement of production, the president went past through the sub-zones of Teseney and Golij, and reached Omhajer semi-urban center.

Taking into account that the introduction of modern irrigation based farming as a principal factor to boosting agricultural yields in terms of variety and amount, the Government has been exerting endeavors to construct numerous water reservoirs. Nearing completion stage, Bademit Dam is among the water reservoirs that have been constructed by Bidho Construction Company. The President then observed the overall construction activities of the Dam. Of its full capacity, this Dam has so far impounded about 2 Million meter cubic of water, according to experts thereof.

Encouraging people involve in farming is one among the fundamental policies of the government of Eritrea. In the light of this fact, concerted endeavors have been directed towards enabling farmers boost production through cultivating fertile plains.

Following his observation of the Bademit Dam, president Isaias made a tour at the farm fields that have been cultivated by individual farmers in kachero area. On his way to Golij semi-urban center, the president went to see about 600 hectares of sorghum field that have been put under cultivation in ketay.

Needless to say, of the large-scale national development programs that have been charted out to be sustainably implemented, top priority has been given to ensuring food security. The construction of Gherset Dam is therefore part of the comprehensive program. Even though the construction of dams demands high skill, as well as huge investment and strenuous efforts, what is really challenging is putting in place of the necessary agriculture infrastructures with in the farm areas.

Undertakings the president observed in the course of his tour to Gherset Dam include, plumping activities, water reservoir with a capacity of holding 20 thousand meter cubic, and a bridge which is being constructed in the middle of the farm fields. Varied agricultural productions such as tomato, onion and pepper that have been put under cultivation around Gherset area through irrigation and rain feed farming have regularly been harvested. This time, experiments have been carried out to cultivate varied fruit types and cereal crops.

The accomplishment of wide ranging tasks and the achievements registered to enhance people’s living standards are the outcome of integrated commitment on the part of the people and government of Eritrea. The general public has in turn become beneficiary of all development undertakings. Apart from the about 3,000 families living around Gherset and earning their living through agricultural activities, around 1,500 people daily flock to the area from different sub-zones of the Gash-Barka region to make benefits of the employment opportunity provided as well as take the most of the Gherset Dam for their household and livestock. It is to be recalled that in his previous tour of inspection president Isaias said, when he observed thousands of herds and cattle of that respective area grazing green meadows were in good condition, that what is most rewarding is to see people and

livestock benefiting from the dam. Likewise, this time also the livelihood of the entire community in the locality has remarkably improved.

Notwithstanding the accomplishment of major development tasks in the post-independence period, unique achievements have been registered in the construction of dams. In the second day of his tour, president Isaias visited to Aligidir Dam. This dam, which was under construction has now impounded satisfactory amount of water.

Apart from visiting Aligidir Dam and looking over the sorghum field put under cultivation with in the vicinity, and also highlighting that successful and profitable outcome would not be ensured without putting in place the necessary infrastructures, the president exchanged views with expects as regards ensuring productivity of the dam. Besides, indicating that keeping sound ecology makes due contribution towards enriching underground water, he reminded the farmers in the locality to judiciously utilize the water resources.

Having inspected the Aligidir Dam and crop fields around the dam, president Isaias indicated that sustainable follow-ups on the agricultural undertakings is mainly responsibility of the people rehabilitated in the area and of the farmers. He then observed a potable water reservoir installed to provide the inhabitants around Enjhay with safe water provision. He also recommended for the reinforcement of such undertakings.

Following which, the president went to Aligidir hill. This place has good ventilation which is suitable for situating new settlement. Thus, the president exchanged views with administrators on establishing settlements in the area and constructing water reservoirs at the summit of Aligidir hill so as to create conducive ground for conducting agricultural activities. He then underscored for the need of providing necessary service rendering institutions to the new settlement area.
As mentioned earlier, the primary aim of president’s tour was to inspect the conditions of agricultural yields. September 4, that is, the third day of the tour, he proceeded to the southern region through Barentu-Karkasha route, after which the president headed through Ugana, Binbina, and arrived at Shamboko semi-urban center for a short break. Departing from Shamboko sub-zone, president Isaias went past through Molqi, Areza, and Mendefera sub zones, and observing agricultural areas along his way, he took the Tera-Imni-Dekemhare route to Adi-Keyih.

At this time, owing to the vast distribution of rainfall which continued from the beginning of July, there is promising agricultural prospect in the Southern Region. On Monday, August 5, the president headed to Senafe sub-zone. Also in the course of  his visit to Senafe sub-zone, the president observed varied crop fields in the plains of Emba-Hisia, Tseada-Korso Gubo, Endadashim, Mezba, Simejana and agricultural areas around Menoksoyto most of which are at promising conditions.

In the fourth day of the tour, on his way to Asmara, president Isaias visited Digsa. In the exchange of views he made with the administrators of the area, the president reminded the administrators, experts and responsible parties for the need of constructing embankments, terraces, and conducting land leveling activities that would be inherited to future generations.  With this, the president successfully concluded his tour of 4 days to the Gash-Barka and Southern Regions.