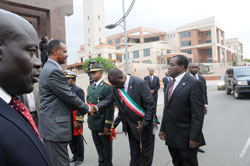 Upon his tour in Equatorial Guinea starting from September 8, President Isaias Afwerki visited various provinces and institutions in the country.

President Isaias accompanied by the President of Equatorial Guinea, His Excellency, Teodoro Obiang Mbasogo, visited a company in the Wolensas province which manufactures adjustable walls and ceilings.

Furthermore, President Isaias visited the town of Oyala which is being constructed currently and managers of the town project gave detailed briefings on the construction process.

Following a visit in a university site which is being constructed including seven faculties, President Isaias made his way to a five star hotel project which incorporates 50 apartments and 500 rooms.

Continuing his tour, President Isaias accompanied by President Theodoro visited oil refinery in Punta-Europa. According to reports from the country, the refinery was established by the partnership of three companies starting from 2004 to 2007 and that it has become one of Africa’s leading oil refining companies.

Reports added that the company produces Methanol, Heavy Hydrocarbon, and Natural Gas and has provided employment opportunities to 1500 individuals including 900 nationals of the country.

Also accompanied by ministers and senior government officials, President Isaias went to the city of Bata, second biggest economic city of Equatorial Guinea, and placed wreath of flowers in the martyrs’ memorial.

Reports also disclosed that President Isaias visited public meeting hall, hospitals, as well as a new football stadium under construction with a capacity of holding 35,000 spectators.