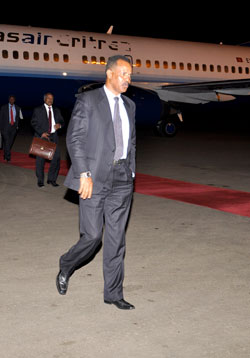 In an interview the President gave concerning the visit, he pointed out he held talks with the Equatorial Guinea leader on bilateral relations in general and bilateral cooperation in economic development and investment in particular. He further explained that previously reached mutual understanding has assumed concrete outcome.

On African issues which the two leaders conducted, President Isaias said that there should exist a strategy that could resolve basic issues in view of the fact that neither the 30-year old OAU nor the African Union (AU) that replaced it failed to meet the expectations of the peoples of the continent.

A joint communiqué was issued at the end of the visit highlighting the mutual agreement reached between the two leaders. The communiqué was signed on the Eritrean side by Foreign Minister Osman Saleh, and Mr. Dovailen on the side of Equatorial Guinea.

In the course of the visit to the West African Republic, President Isaias toured a number of places as well as economic and social institutions, accompanied by President Teodoro and other senior officials of the country. Moreover, he laid wreath at the Martyrs Monument in Bata, the country’s second biggest city accompanied by Ministers and other senior officials of Equatorial Guinea.