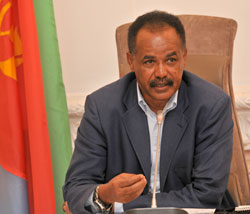 The meeting of the Eritrean Cabinet of Ministers which opened at Denden Hall here in the capital yesterday continued also today.

Asmara, 15 September 2011 – The meeting of the Eritrean Cabinet of Ministers which opened at Denden Hall here in the capital yesterday continued also

The meeting conducted deliberations on the issue of coordination of national economic and social development plans. Accordingly, it mapped out action programs regarding follow-up and coordination of national plan after conducting discussion on the contribution of projects set for implementation by various sectors, and the economic and financial contribution of such projects to Gross National Product and the success of major national plan; their role in meeting present and future demands of the general public and upgrading the living standard of the people; nurturing the spirit of self-reliance, job creation, introduction of modern technology and developing human resource potential; undertaking studies, gathering and processing information both at the individual, zonal and sector level.

Proceeding to the financial sector, the Ministerial Cabinet held deliberations on restructuring and plans of the sector, promoting efficiency in revenue and applying modern technology in the task, in addition to the accomplishments registered in expanding inland revenue offices. The meeting also held in-depth deliberations in the issue of budgetary plan.

Furthermore, the Ministerial Cabinet noted the Government’s effective implementation of development plans over the past 13 years, despite the numerous external economic conspiracies and constraints short of incurring excessive debt, besides the availability of limited resources. It further assessed that such an achievement played vital role in ensuring micro-economic stability, thus enabling Eritrea to become a nation with the lowest debt in Africa. The meeting subsequently decided that effective use should be made of available national resources so as to reinforce the pace of development programs, and thereby ensure sustainable economic growth. Likewise, the Ministerial Cabinet meeting conducted extensive discussion regarding the handling of international cooperation.

In the domain of education, the meeting assessed that the commendable achievements scored in the expansion of schools and participation of nationals in education. Nevertheless, it stressed the need to exert vigorous endeavors to improve the quality of education.

Moreover, the meeting held discussion on the tasks accomplished and constraints encountered regarding teacher training, publishing of text books and facilitating the supply of educational materials.  It adopted resolution on mapping out effective strategy for the education sector to give due emphasis to seeing to it that the nation’s resources are put to maximum use through upgrading the level and quality of education, expanding technical and vocational training and increased resort to application of information technology, among other.

The Ministerial Cabinet thoroughly discussed the development of the study and progress for setting  a task force responsible for designing the 5 year Strategic Plan, the document that elucidates the National policy of health and readjusting the organizational structure of the sector.

In addition, it conducted extensive discussion  after evaluating in detail the proposed plan and budget regarding the establishment of efficient health system, ensuring the availability of health material and facilities, follow-up  and control of communicable diseases, implementation of national vaccination programs, ensuring  safe health  environment, prevention of blindness, development of emergency centers, training of health workers, and the ongoing activities of producing medicines for local use and export.

The Ministerial Cabinet in its deliberation regarding Labor and Human Welfare during which it assessed the endeavors being made to help disadvantaged and non-privileged nationals, it deeply discussed its objectives and result in alleviating social problems. Noting the experience acquired in handling the volcano eruption in the Southern Red Sea region, the meeting discussed the importance of advance preparation in order to minimize the impact of future natural calamities. The Ministerial Cabinet also discussed 5 years plan focusing on the reduction of unemployment, assisting orphans get skill training through long-term loan and controlling the scope of social problems. It also endorsed the plan for conducting research on measures that need to be taken on the part of different sectors to ensure social justice.

The Ministerial Cabinet further discussed the action plan for ensuring the rule of law. The plan in this domain incorporates that of conducting awareness campaign to the public through media outlets and seminars, especially on basic civil and criminal codes. The Ministerial Cabinet also discussed plan pertaining to judicial capacity building, classifying the extent of authority as regards courts and enlarging the infrastructure facilities of justice institutions so as to ensure efficient and timely rendering of services.

In its deliberations regarding news and information activities, the Ministerial Cabinet closely assessed the political and civic tasks being carried out through media outlets and the arts in strengthening and reinforcing social values.  Noting that the jamming maneuvers resorted to by enemy quarters attests to the strengthen of our media outlets, the Ministerial Cabinet held extensive deliberations regarding the investment that needs to be made in technological development of information networks of radio, television and newspapers so as to become competitive at global level.

It also conducted discussion on involving nationals inside the country and abroad to participate in the activities of the national media, and thereby give added impetus to the work of the nation’s media outlets, besides rebuffing propaganda and cultural ploys of dominance, as well as exposing acts of distorting information, and thus highlight the objective truth in connection with global and multi-faceted scenarios. Moreover, the Ministerial Cabinet meeting approved the future action program of the sector.

In its discussion concerning diplomatic activities, the Cabinet of Ministers expressed deep appreciation and respect to the Eritrean people inside the country and abroad not only in foiling the illegal Security Council sanctions resolution but also dealing staunch rebuff to the cold war, besides defeating such forces, and the all-round economic, information, political and diplomatic struggle they waged against the same forces. Furthermore, the Cabinet of Ministers assessed the diplomatic tasks accomplished at the level of the President, Ministers, Ambassadors and other delegations towards promoting good-neighborliness for mutual benefit, ensuring regional stability, enhancing bilateral relations, creating the necessary groundwork for annulling the illegal and unjust Security Council sanctions resolution against Eritrea, and putting an end to the occupation of sovereign Eritrean territories. In connection with the outcome of the meetings held with the Security Council and the sanctions committee, the Ministerial Cabinet conducted in-depth discussion on future diplomatic activities.

In conclusion, President Isaias Afwerki gave directives for the drawing up of action programs for 2012-2014 in all sectors by the end of November, taking into account the worthwhile ideas put forth at the Ministerial Cabinet meeting. Thus, the two-day meeting of the Eritrean Cabinet of Ministers concluded.

United to Foil Any Conspiracy (Part I)