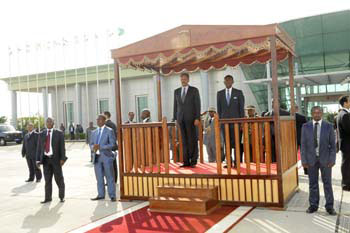 Located in west central Africa, Equatorial Guinea comprises a mainland territory and insular regions that consist islands. Bordered by Cameron to the north, Gabon to the east and south and Atlantic Ocean to the west, the country is surrounded in an ever green equatorial rainforest belt.

On his stay at the Equatorial Guinea, President Isaias visited varied districts of the island city of Malabo. The president begins his tour with a five star hotel which is expected to boost the tourism sector of the country. The five-star hotel, known as Softel, is situated in an area that used to be a dense forest two years ago. Since most part of the country is covered by a dense forest, clearing a large forest area was a prerequisite to carrying out any sort of construction activity. Likewise, a large area of vegetation was cleared for the construction of the hotel.

In the course of his visit to the hotel that has been under construction for the last two years, President Isaias received brief explanation from the managers of the construction works. At this time, the hotel is nearing finalization. The president also observed a gathering hall, a hospital that could accommodate 160 beds and a guest house.

In the evening hours of the day, President Isaias participated at a dinner reception arranged for his honor by Equatorial Guinea’s President. In briefing, he delivered at the occasion, President Obiang expressed that experiences Eritrea acquired in efficiently utilizing natural resources are highly exemplary. Highlighting that the two countries share common views  in the supremacy of the rule of law, non-interference in internal affairs of countries, respect of territorial integrity and other issues, President Obiang said that President Isaias’ visit to the country would strengthen bilateral relations between Eritrea  and Equatorial Guinea.

President Isaias on his part, commended the worm welcome accorded to him and the Eritrean delegation and the dinner reception, as well as expressed appreciation to the country’s speedy infrastructural progress.
Former colony of Spain, Equatorial Guinea achieved its independence on 12 October 1968. The total geographical area of the country is 28,050 km2 which is inhabited by around one million people.

Equatorial Guinea comprises five ethnic groups namely: Fang, Bube, Mdowe, Bujeba, and Annobon. Even though Spanish and French are official languages of the country, each ethnic group has its own language.The country is endowed with good potentials of natural resources. The discovery of oil in the 1990s has also significantly increased revenues obtained from such resources. The economic growth the country has registered continued to impact the implementation of varied infrastructural tasks which are indeed reflections of the growing economy.

While touring the Punta-Europa, heads of the institution briefed President Isaias about the operations and activities of the plant.
In the afternoon hours, President Isaias headed to Bata- known as an economic city. There, the president observed auditoriums, a hospital and a new stadium that is under construction with the capacity of holding 35,000 spectators, a school that could accommodate 1,200 students in two shifts and other places that signify economic prospects of the city.

Sunday, September 10, President Isaias headed to Welensas-one of the country’s seven provinces. The major plan in the province is the establishment of a new city. To facilitate a speedy construction undertaking, a new factory that produces finished pillars, walls and ceilings has commenced production five years ago. In the course of his tour to the site, Eritreans working for the factory accorded him warm welcome. Oyala, which was once a typical village, is now selected for situating a new city near the N-shaped rivers course. An international university that is situated on an area of about 70 hectares is expected to encompass seven faculties. 50 well furnished apartments are also constructed on a vast site. It is vivid that huge investment has been made for the construction of a five-star hotel that contains 500 rooms. So far, basic construction works of the hotel have been finalized. Construction works of the newly situated city is expected to be fully finalized in about one and a half year range of time.

Having visited the major sites of the country, President Isaias participated in the signing of a cooperation agreement held on 10 Sunday. Eritrea’s Minister of Foreign Affairs, Mr. Osman Salih with his Equatorial Guinea’s counter part signed the agreement. In the occasion both the presidents of Eritrea and Equatorial Guinea answered questions from different media outlets.

Expressing the realities he discovered in the course of his visit to the country, president Isaias appreciated the infrastructural undertakings that are being implemented in Equatorial Guinea. The president lauded the achievements registered and the endeavors that country has been making to invest the revenues obtained from natural resources towards people’s benefit.

Indicating that he discussed with president Isaias on major issues of mutual concern, President Obiang endeavors would be made to further reinforce bilateral relations. President Obiang further stated that Equatorial Guinea would learn a lot from Eritrea and particularly to achieve the set out goal of ensuring food security by the year 2020. He also took note of the importance for citizens of both nations to visit each other and cooperate among one another in the near future.

Barentu sub-zone: City Council calls on parent to back up endeavors to enhance student participation in school