United to Foil Any Conspiracy (Part I) 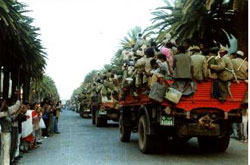 The history of the people of Eritrea throughout the last half a century is full of heroic deeds and sacrifices. After the British came to Eritrea during the Second World War defeating the Italian occupation forces in 1940 they came with mischievous promises that they would give Eritrea and Eritreans their rightful place in the annals of history. After some years of their occupation they came out with sinister ideas and plan to partition Eritrea in such a way that the north and west of Eritrea to go to Sudan, the rest to Ethiopia, which was an idea designed to suite the Ethiopian regime. The sinister plan was foiled by the people of Eritrea which have always in mind unity is strength and Eritrea is not for partition.

The other step taken by the international community in 1949 was to decide the fate of the three Italian colonies in Africa, namely Eritrea, Somalia and Libya. Unlike the other two the case of Eritrea received once again a conspiracy. The infamous presentation by the then US Secretary of State, John Foster Dulles in 1952 on the floor of the UN General Assembly, which Eritreans never forget to this day, was:
‘From the point of view of justice, the opinions of the Eritrean people must receive consideration. Nevertheless the strategic interests of the United States in the Red Sea basin and considerations of security and world peace make it necessary that the country has to be linked with our ally, Ethiopia.’

This second major conspiracy angered the people of Eritrea which were eagerly awaiting a sound and reasonable resolution by the international community. And in December 1952, the UN finally declared Eritrea an autonomous unit federated to Ethiopia and hence turned Eritrea over to its most brutal and oppressive ruler to date: Ethiopia. After ten years of federal rule in 1962 the Ethiopian regime decided to annex Eritrea undeterred by the UN resolution which was supposed to voice its concern and act in accordance with the rule of law. This being another transgression of the world community against the Eritrean people, it however triggered a scenario in which the people of Eritrea fully aware the only remedy they have at hand was to take their own initiative to decide their future. First through peaceful means and later prompt to armed struggle for independence.

The armed struggle for independence has also seen many conspiracies from different corners of the world from political to military interferences. From the political and military supply from the US administrations to the military interference from then the Soviet Union. During this period no one from outside came forward to condemn such unlawful acts or the indiscriminate killing of civilians, the burning of villages and the suffering of the people at the hands of the criminal Ethiopian regimes. Once again the people of Eritrea had to act on their own enduring all the hardship and challenges.

The bitter struggle for independence, all the sacrifices paid, the suffering of the people, the plight of Eritreans, the displacement of people and scatter throughout the globe to seek refuge from the suffering of the people did not remain in vain. And all the conspiracies at different levels and different degree did not pay off to those conspirators. They met resolute rebuff from the people of Eritrea and were doomed to failure to only remain in the books of history as black spots of those responsible for them and as reminders for the people of Eritrea to remain resilient to what ever challenge might come from different corners. All the suffering cam to an end on the 24th of May, 1991, with the total independence of Eritrea and the collapse of the notorious Derg regime.

On May 24, 1991 Asmara residents realized that the liberation fighters have rooted the army of the occupying regime and have entered the metropolitan city. And the populace in a spontaneous outburst of happiness and relief flung open their doors and rushed into the streets to dance in jubilation, some still in their pajamas. The dancing lasted for weeks for it was the beginning of a new era. Era of independence, era of the end of occupation, era of a new chapter in the history of the country. And above all Eritreans demonstrated they are people of can do in what ever circumstances foiling the conspiracies that may come from any angle.

Q&A with Dr. Andom Okbamariam Regarding Skilled Manpower of the MOH