Wedding Ceremonies in the Kunama Ethnic Group (Part I) 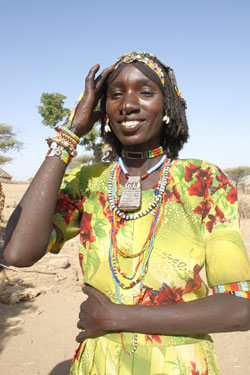 After the necessary preparation is done by both the groom and bride to be and the wedding day is officially announced, two elders known as ‘Kelete’ from the groom’s family will go to the bride’s house with a goat, the color of the goat is determined by the family of the bride and the groom’s families are required to  meet the demands of the bride’s family with the color of the goat, once the goat is brought to the bride’s house, the bride would be asked to jump over the goat.

In Kunama ethnic group, it is believed that a bride able to jump over the goat to be a virgin and otherwise to the contrary, but nothing is changed during such circumstances. The elders selected to go to the bride’s house need to be still married to their first wife and the elder child need to be alive, so the men would be send to the bride’s house to endow the dowry and other presents to the bride’s family. During such occasions additional goats are also provided to the bride in the request of the father or uncle of the bride.

After this ritual is over, the elders, ‘kelete’, will return to the groom’s house and later all the families of the groom will gather and go to the bride’s house carrying their spears, and the bride’s families receive the groom’s families with similar preparation, this meeting is aimed at to discuss how many cattle to endow to the bride as a dowry.  Then the elders will two small stones to the father or uncle of the bride, father or uncle of the bride will refuse to accept the two stones and they negotiate on the stones, the stones represent the number of cattle for endowment. Then both families will exchange their spears marking that they have reached an agreement on the number of cattle to present to the bride. Two individuals from the elders will go to the houses of the couple respectively and announce the agreement; the mothers waiting for this message will then sing, dance and ululate.

All the cattle and other materials that are included in the dowry will be given to the family of the bride three to four days after the wedding day. During such occasions, the elders, ‘Kelete’ will present the dowry and the other gifts counting and displaying everything to the crowd gathered for the ceremony.  And if one of the cattle died due to any reason before this day, it is the responsibility of the groom’s family to replace it.

After the negotiation on dowry and presents are settled between the members of both families, men from both sides will gather and celebrate the union of the two couples. During such festive men from the groom’s side will sit to the left and men from the bride’s side will sit to the right and a village elder will sit in the middle. Then the elder will announce the union of the couple and bless them. After that he will shout ROOOOOOOOHOOOOOO and the men will follow him, after shouting for four times that is going to be the end of the festive of the ‘Kelete’.

After this ritual the bride will move to her neighbors house located to the right of her father’s house and there will be festivities and celebrations in the groom’s house where an ox , “Buta Ayela” and a goat “Buta Ashenda” will be presented to the bride’s house.

Q&A with Dr. Andom Okbamariam Regarding Skilled Manpower of the MOH