President Isaias holds talks with Heads of State of Guinea, Senegal and Foreign Minister of China 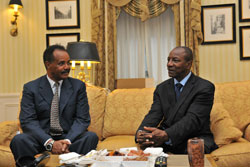 President Isaias Afwerki held talks in New York on September 20 with the Presidents of Guinea and Senegal as well as the Chinese Foreign Minister.

Asmara, 21 September 2011 – President Isaias Afwerki held talks in New York on September 20 with the Presidents of Guinea and Senegal as well as the Chinese Foreign Minister.

In his meeting with President Alpha Conde of Guinea, President Isaias and the Guinean leader agreed to work together towards enabling Africa to solve its own issues, play due role at international forums taking into account the number of the people and resources, as well as strengthening cooperation among African countries and reinforcing the AU. They also agreed on Eritrean-Guinean collaboration in essential development sectors.

Likewise, in his talks with President Abdoulaye Wade, President of Senegal, which focused on developments in Africa, President Isaias and the Senegalese leader agreed to work together in strengthening the African Union.

In his meeting with the Chinese Foreign Minister, Mr. Yang Jiechi, President Isaias expressed Eritrea’s expectation that China, which is registering all-round progress, to make major contribution to Africa in its endeavors to ensure the wellbeing of its people. The Chinese Foreign Minister on his part elaborated that his country will do its level best to promote Africa’s development.

Moreover, reporters of the Ministry of Information indicated that the two sides pointed out that Eritrean-Chinese relations is both exemplary and productive, besides reaching understanding that the two countries to work together so as to enhance cooperation, particularly in trade and investment.