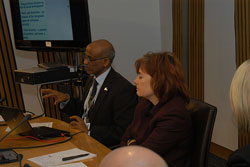 Eritrean Ambassador to the UK and Ireland Mr. Tesfamichael Grahtu, delivered an insightful presentation to Scottish Parliamentarians. The event took place at the avant-grade Scottish parliament situated in the Hollyrood area of Scotland’s capital Edinburgh.

Asmara, 22 September 2011- Eritrean Ambassador to the UK and Ireland, Mr.Tesfamichael Grahtu, delivered an insightful presentation to Scottish Parliamentarians. The event took place at the avant-grade Scottish parliament situated in the Hollyrood area of Scotland’s capital Edinburgh.

Organized by the Eritrean Scottish friends in association with Cross Party Group on International Development, the Ambassador was invited to address Scottish parliamentarians on Water, Self -Reliance and Sustainability from African perspective, the Ambassador also gave extensive presentation on why we hear so much about drought in the Horn of Africa, but not in Eritrea?

Amongst the participants were members of the Scottish parliament, diplomats, high scholars, and various representatives of Scottish institutions. The opening remarks was conducted by Sarah Boyack MSP (Convener) followed by the Amba

ssadors extensive briefing on the challenges that faced Eritrea from the time of independence that ranged from food shortage, devastated economy, education, to health drawing upon how the government overturned the situation by means of pragmatic approach and implementing the strategy of self-reliance.

The Ambassador also mentioned that it was not a miracle that Eritrea achieved a bumper harvest in 2010 as a result of the concerted effort done in transforming the agriculture sector and the promotion of food security. He further explained that there is no complacency as food security goes beyond the fulfillment of the demands of just few years. The long term strategic goal and effort to promote food security continues to be a major issue of sustainability but will definitely require time, space and organization. Nonetheless the pragmatic policies and practice have certainly so far shown that “it can be done” and there is already the political will and commitment to go along the path.

Ambassador Gerahtu also linked the issue of water security with the basic values & drive for transformation of a new Eritrea. He further discussed the three pillars needed for the goal, which include owning own decision, self-reliance, and building national capacity.

Towards the end of the presentation, the participants were given the opportunity to ask the Ambassador questions on health, education, as well as mining, tourism and the other sectors that could revitalize the Eritrean economy. Adequate answers including current achievements with regards to the Millennium Development Goals, as well as the policies that the government of Eritrea is taking on the overall diversification of the economy for the purposes of sustainability were clearly explained.

According to Mr. Gordon Peters and Mr. Michael Freudenberg, members of the Eritrean Scottish friendship, the outcome of the presentation was enlightening and was one that gave an insight into the overall issue of aid and how nations should take Eritrea as a model. In addition, most of the participants expressed extreme satisfaction in the presentation both on content and delivery.