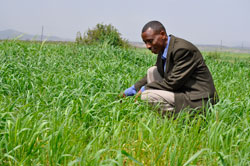 It is not the amount of resources which counts most, but rather what one could do with the available resources in hand. The extent of the required facility, ingredients and many other factors may lead to the achievement of a speedy or slow progress. But what is more gratifying is a progress made from almost a ground zero level. Starting from almost nothing and achieving tremendous success indeed brings a pleasure which could arm one with the sprit of optimism and confidence in accomplishing tasks that demand strong commitment. Putting one’s hand in any development undertaking with what you are capable of is then a beginning of the ultimate success. All hands united can make a difference. Endeavors which have been made to cultivate rye seed and increase its output are really encouraging.

It is believed that rye was widely cultivated in Eritrea some 300 years ago. But, gradually its production had fallen and thereby totally extinct from the country for it was taken as a weed.  In Dubarba sub-zone efforts have been made for the introduction of this seed with the preliminary efforts by Mr. Daniel Kahsay, an exemplary farmer in the sub-zone. Even though he started to cultivate such a grain in the year 2003 within the premises of his houses’ yard, Mr. Daniel has been involving in such undertaking in an enhanced manner since 2007 for he received substantial encouragement from concerned institutions.

Mr. Daniel explained that satisfactory out come has been registered in raising awareness of the general public as regards the benefits of rye and increasing production amount so as to secure its sustainability.  Starting with just five seeds of rye, he managed to increase the yields to 10 quintals, some of which have been distributed to about 75 farmers of the sub-zone. According to Mr. Daniel, farmers have been showing interests to cultivate this grain.
Taking into account Mr.Daniel’s initiatives, the Administration of Southern Region motivated him to work on a farm land and also provided him with a well. Likewise, the Ministry of Agriculture has provided him a pump motor on lease at reasonably affordable price.

Rye has been widely cultivated in varied countries of Europe, Asia, America, and Australia. As this grain can be cultivated in much poorer soil textures, it becomes an essentially valuable grain that could be

introduced even in susceptible areas.

The rye grain has been registered in Halhale agricultural research institution so as experiments would be conducted. The food and nutrition department of the research center is looking to find ways of mixing such a grain with sugar potato so as to substantially contribute in the endeavors of achieving food security.

The rye grain belonging to the family of wheat and barley can be processed for food stuff and beverages. A combination of the qualities mentioned above makes rye of paramount importance. As regards the importance of rye, Mr. Eyassu Ghebretatious, director of Halhale Agricultural Research Center, said that it can play a significant role in the effort to ensuring food security, albeit not corroborated by laboratory test.

Indicating that she used to hear the nutritional value of rye Ms. Mekeresh Habte, a farmer in the sub-zone, said that she cultivated rye and is availing herself of its benefits. Likewise, other farmers who have been cultivating the grain in the sub-zone also expressed appreciation towards the benefits which can be obtained from rye production.

Expanding the range of rye production and making due contribution to ensuring food security is in fact of a substantial importance. Mr. Daniel has a personal vision of meeting the local demand by the year 2020 and for concerned institutions are encouraging such initiatives the envisaged goal could be achieved a head of that time.