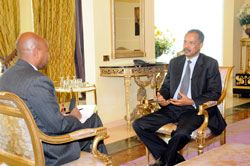 It is to be recalled that President Isaias Afwerki held an official visit on September 8 through 11, 2011, to the Equatorial Guinea at the invitation of President Teodoro Obiang Mbasogo. Following is part 1 of the interview he conducted concerning the visit with local media outlets.

In your talks with President Teodoro Obiang Mbasogo, you held sector by sector deliberations on a number of issues. Could you put us in the picture with reference to the outcome of the talks?

Bilateral cooperation on economic development and investment has been the major talking point. In spite of the mutual understanding, the opportunities for interstate trade activities in the absence of East-West infrastructure facilities within the continent has been and remains restricted due to this geographical barrier. When it comes to the prospects in investment, however, we need to exhaust the wide-ranging opportunities. Both countries ought to identify sectors for potential business activities to engage in. As mutualism in this area has long been disregarded, we have to first map out tangible programs prior to calibrating the existing trend through general terms of understanding. The possibility of extending bilateralism to have room for partnership cooperation in regional and international investments has also been in the spotlight.

Through the visit, we have now managed to turn the much contemplated issues into something sensible. Apart from the long-established pattern of signing protocols as well as preparing blueprints of major agenda items, both parties will have to contribute for a win-win investment into the mutual fund. A dynamic mechanism has, nonetheless, to be in place to effectively put to use and administer the fund. These currently emergent enterprises will through time become labor-intensive for both nations so as to develop into grand ventures.

Are there, therefore, select areas of partnership by Eritrea and Equatorial Guinea?

The two countries have apparently shown interest in the sectors of mining, manufacturing, as well as in a number of small- and medium-scale agroindustry. The potential in tourism or construction works among many other opportunities yet seems forward-looking. Although both nations have so far identified around ten sectors, the opportunities in investment are accorded central position as they are the realistic ones. We can only materialize the joint venture through establishing a developing fund. Primacy has been given to select sectors as other areas are yet to be streamlined in due course. A matter-of-fact outcome of the visit is that there is a common understanding as regards the mutual interest, which has now resulted in a working venture.

Is a time frame set for the joint venture to come into effect?

The notion of time frame is not politics, but rather an investment. If you have some fund reserved to be capitalized on certain sector, industry or business, you need to first study the opportunities and feasibility of the investment within regional and international contexts. Investing in the mining sector, for instance, not only undergoes the exploration and excavation phases, but also involves partners other than the two parties. Are the projects feasible? Is investment in the sector lucrative? How far can investment in the area expand? Each opportunity requires a sector by sector feasibility study. The interplay of management and partnership cooperation also comes into view while launching a joint venture. Relying on the result of feasibility studies, the fund itself must be broken down into tangible projects, as well as reflect on the potential of holding stakes.

An independent body of professionals authorized to conduct a thorough study on the potentials of the mutual fund should be set up in order for Eritrea and Equatorial Guinea to contribute within the parameters of their resources. Those in-house professionals will have to identify on priority basis prospective areas for investment depending on the working papers and funds both nations would present without delay. Such timesaving modus operandi, however, with all its advantages, is somehow an unusual pattern. In the event of implementation, those professionals empowered to decide upon the right mechanisms will, beyond political will, translate the opportunities into practice.

President, you also deliberated in your talks on continental state of affairs. What were the issues of discussion with respect to Africa?

Needless to say, there are a number of subjects of debate with regard to Africa. Irrespective of the resorts to sidelining one party in favor of the other, one of the major controversial subjects that have long been at issue is the nonexistence of a continentally representative organization. A view Eritrea commonly shares with Equatorial Guinea is the ineptitude of the formerly Organization of African Unity –OAU–on a continental scale. Throughout its history of over three decades, OAU had failed to meet the objectives which the organization per se had been founded upon, and thus, satisfy the aspirations of the African people. Even now in the 21st century, Africa remains a marginalized continent. In principle, the replacement of the OAU by African Union–AU–was initially a welcome proposal by many. Following the formation of AU in 1999, nevertheless, much of the decade went to waste in circumvolution around idealistic matters.

Today’s AU, as opposed to the former OAU, was supposed to witness better organizational performance and implementation of well-thought-out action programs, clear-cut objectives and a well refined charter. Is the new African Union indeed an effectual substitute for the supposedly obsolete one? No reasoning person whosoever, abreast of the developments, dares to refer to the existence of a meaningful African Union. Regardless of the status quo, however, Africa must not be relegated to perpetual marginalization. Is the continent supposed to remain slothful while the rest world advances? Or, does it have a continental organization capable of operating in the fast-tracked globe? Since there is no established formula whatsoever, once African nations reach a common consensus for the formation of a continentally representative and yet effective organization, they will have to forward salient propositions other than diversionary matters for further deliberations.

As stated time and again in previous continental meetings, Eritrea maintains the view that Africa has three major problems. These continent-wide debacles are a critical mass of the fiascos which virtually every African country is characterized by in the first place. They can be analyzed in breakdowns and synthesized for a holistic approach. Persistent external intervention is the second cause. Although Africa was meant to establish a continentally representative organization that actively takes part in global affairs, organizational umbrella of the continent has thus far been the aegis of myriad interventions for external agendas, where a significant part of the shambles would enter into the equation. The yet unachieved term ‘independence’ is repeated in Africa than anywhere else in the world, provided the fact that ridding of the vestiges of colonial history is still in the minds of all Africans. The continental organization, which its founding fathers had aspired to achieve full decolonization of Africa, is no more independently in effect, be it economically, politically, culturally, as well as against other benchmarks. As a result, the urge for full independence that has prevailed over the past sixty years is yet to be fulfilled.

Virtually the entire continent has been and remains subject to neo-colonization. As I explained above, this internal state of affairs compounded by external intervention is exasperated by the lack of collective focus and harmonious coordination. Stating the resources, population size and other assets the continent is endowed with is of no effect without resolving the aforementioned shortcomings through respective homework. Taking the dynamic state of global mutations into account, the building blocks of a united Africa need to first be given primacy prior to dealing with promoting African resources, creating a win-win partnership cooperation in every corner of the world, as well as setting up an African Unity free from external interference. If we ask whether the continental organization has succeeded in resolving crises for the past well over a decade, the crises throughout Africa have merely been worsening all the more. A stance that Eritrea and Equatorial Guinea commonly share to this end is but the coordinated endeavors to work together on priority basis in place of putting forth individual proposals.

If we are starting from the scratch in an attempt to take account of subsidiary issues in Somalia, the Sudan and South Sudan, Côte d’Ivoire, Libya, South Africa, West and East Africa and so forth, they will simply give rise to diversionary matters, thereby eluding our attention from dealing with internal issues on our own. In the face of limitations, there is a common consensus of many years with the leader of Equatorial Guinea on how to jointly work. Despite a number of Africans have already tuned themselves to the same tendency of focusing on subsidiary matters, we can only deal with the details once due focus towards settling these issues is attained. There is a comprehensive understanding by almost all nations on how to cooperate with each other. Accordingly, however time-consuming or capital-intensive it might be, joint effort that counts on common values and understanding is thus the greatest gain.