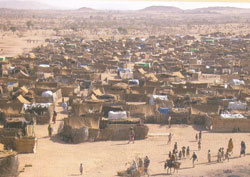 After independence, the people of Eritrea were concentrated in rebuilding the war torn infrastructure of the country and nation building. For the Eritrean people the thirty years of bitter struggle and the sacrifices of its loved ones was too enough they had no intention or the will to see another war that will take other Eritrean lives.

And the years following independence until 1998 were years where Eritrea scored tremendous achievements in terms of economic recovery, establishing government and social institutions, and enabling people to recover from the war trauma and fear into a normal life. They were also years in which many Eritreans that had fled to get refuge from the atrocities of the Ethiopian regime elsewhere in the world came back home to reunite with their families and friends.

But again the TPLF regime at the behest of some elements who have found it hard to swallow the independence of Eritrea came plotting other conspiracies to wage war in a bid to reverse the history of Eritrea and Eritreans simply because contrary to their dream Eritrea was achieving unprecedented economic progress. Their war of aggression, however, was met with very strong resistance of the Eritrean Defense Forces and the people of Eritrea living inside the country and abroad. Once again the people of Eritrea demonstrated to the wide world that Eritrea is a land of heroes and heroines ready to give everything they have including their lives for the country they love.

Looking at the participation of the people living inside the country and abroad, the moral boost they were providing the EDF, the financial contributions, food and other supplies and the world wide demonstrations they were conducting to draw world attention was simply tremendous. With that the dream of the aggressors faded away in day light. Eritrea won its right on the ground in the battle front and at the international forum, at The Hague.
As the saying goes “evil doers never sleep” the conspiracy continued with the seemingly good intention but different agenda from behind, dialogue. Dialogue to reverse the final and binding resolution of the border commission, face saving for the aggressors, the intention could many, but it created a situation of no peace no war.

As part of the many conspiracies comes the allegation that Eritrea is involved in the situation in Somalia. The allegation goes too far including the accusation of 2000 Eritrean soldiers helping the Somali fighters. When the allegation was found unsubstantiated and with no tangible evidence the conspiracy continued by bringing numerous and unfounded allegations. That culminated with the infamous UN Security Council sanctions resolution. One could feel that all the allegations that were pouring against Eritrea prior to the sanctions resolutions was aimed at or targeting to reach to such scale of blatant measure against the innocent country.

The baseless sanctions resolution was met by furious opposition by the people of Eritrea. The world wide demonstrations conducted on February 22 of 2010 are vivid examples on the “united we act” of the Eritrean people. On that day hundreds of thousands of Eritreans and friends of Eritrea took to the streets of Washington DC, Geneva, and Melbourne to protest against the unfair, unjust and illegal Security Council’s Resolutions 1907 against Eritrea.