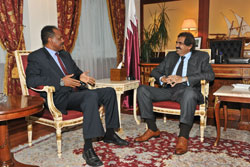 In the meeting the two leaders exchanged views on significant issues featuring in the agenda of the UN General Assembly. Moreover, following discussion on issues in the Middle East and the Horn of Africa as well as restructuring of the UN, the two leaders reached understanding on the steps that need to be taken for deepening Eritrean-Qatari relations.

Similarly, President Isaias conducted discussion in his lounge on the same day with the Italian Foreign Minister, Mr. Franco Frattini. During the meeting, Mr. Franco indicated that Italy expects Eritrea, as a country that plays significant role in the Horn of Africa, to enhance its role towards resolving issues in the region.

Furthermore, following discussion on the Sudanese and Somali issues, the two sides reached understanding to exert vigorous efforts towards strengthening Eritrean-Italian ties, especially in trade and investment, according to reporters from the Ministry of Information.

Mr. Frattini asserted that the Italian government would exert the necessary endeavors towards raising investment on the part of Italian companies in Eritrea.

Administrator calls on farmers to step up endeavors regarding crop harvesting