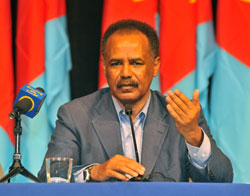 President Isaias Afwerki yesterday conducted an extensive seminar in New York City to thousands of Eritrean nationals from all corners of North America and Canada.

Addressing to Eritrean citizens at the Manhattan Center Hall who traveled for 6 to 30 hours by train, vehicles and planes, the President declared: “You may say that I came to you after ten years, but on my part I have never been away from you even for a single hour”.  He further expressed appreciation to the Eritrean citizens living in the US and other countries of the world for their continued wonderful and unremitting rebuff, which constitutes matchless pride.

Pointing out that it is people’s power that makes an individual and a nation both brave and courageous, President Isaias noted that as meeting challenge, mounting staunch rebuff and steadfastness have become the tradition of the Eritrean people in the face of repeated external multi-faceted acts of hostility designed to foment national disintegration, besides instigating confrontation and bringing about hunger, especially over the two years, the Eritrean people nonetheless succeeded in ensuring the safeguarding  of the nation’s sovereignty and its forward march. “Thanks to our not failing hostage to war and psychological warfare and due to the fact that we got fully engaged in nation-building endeavors along with our people, we have reached the present promising stage,” he elaborated.

Moreover, President Isaias asserted that contrary to those who wish hunger and famine to prevail in Eritrea,  there exists no hunger in Eritrea today, nor did it exist yesterday or would exist tomorrow in the country thanks to  the putting in place of infrastructure facilities and expand services nationwide, in addition to developing human resource capacity in which the people take active participation and become beneficiaries.

The President also explained that the Eritrean people, having going through major challenges and now standing in a better and firm ground, the nation’s development programs would proceed forward with add vigor as of 2012 on the basis of strong organization and work methodology.
Parallel with this, he called on Eritrean nationals residing abroad to enhance their participation and contribution in the opportunities being created in all sectors, and this not on an individual basis but in an organized manner.

Furthermore, President Isaias underscored the fact that Eritrean nationals in the Diaspora fully stand with their country both in mind and spirit, without falling prey to enemy traps, is what is causing deep frustration to enemy quarters.  He also called on them to acquire skill and knowledge, upgrade their capacity and save money for their future lives.

Indicating that the past generation waged struggle and continues to exert the necessary endeavor at present is in order to ensure a bright future for today’s youths and future generations, he urged generations to shoulder responsibility and play due role to this end.

Regarding support to the families of fallen heroes, the President said that beyond extending material assistance, moral satisfaction is the most important factor, and stressed the need for extending assistance to martyrs’ families as a matter of obligation at the individual level.

Reporters from the Ministry of Information indicated that the opinions put forth by seminar participants amply demonstrated as ever the strength and unyielding  spirit of Eritrean nationals living abroad, their strong ties with their compatriots,

the Homeland and their leadership  which dealt deep frustration to enemy quarters, in addition to reinforcing national unity.

Expressing words of apology for those nationals who were compelled to stay outside the Manhattan Center Hall due to lack of space, President Isaias greeted them amid wide applause.