Meeting of Minds: The Leadership and the People 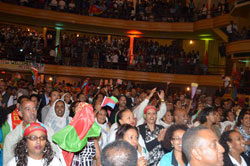 Good leaders are measured and judged by their intimacy and solid relationship with their people. A good leader always never shies to meet and interact with fellow citizens in his every day life in what ever circumstances.  He is trusted and genuinely respected by his people for people believe he lives their life with honesty and integrity. Unlike others who understand their detachment from the people and fully comprehending the consequence that might arise if they exposed themselves with the people and try to avoid public appearances in the name of security, a good leader comes forward and mixes with the public with confidence for he knows what he is doing and people know exactly what they expect from him. Such a leader is a motivator, inspirational and considers himself as part of the public working towards the same goal, improve the life of the common citizen. This kind of leader will not be afraid to roll up his sleeves and get to work.

In Eritrea it is almost common news to hear that President Isaias Afwerki visiting the remote areas of the country as part of his inspection of developmental activities and overseeing the progress that is undergoing. In every corner of the country dams are being constructed, vast land is being cleared for cultivation, colleges are built to provide access of higher education for all, roads are being built so that people have access of transportation, and what have you. The tour of President Isaias to the sites of these projects is hence to follow up the progress, to consult with the workforce in the projects, to provide guidelines and encourage and congratulate the workers for their good performance.  In the mean time he inspires confidence on the part of workers and draws out the trust and best efforts of the team to complete the task well. This is the reality may be many from outside the country may not realize. 26th of September 2011, however, witnessed the culture of the President and Eritreans in New York very open for the international community to observe the reality of the situation that I have been talking about. President Isaias Afwerki meets thousands of Eritreans living in the US and Canada.

their country. Upon arriving to the meeting hall, the Manhattan Center, they queued for hours to get the chance of entering the hall and many did while others could not make it because of the capacity of the hall.
Upon entering the meeting hall where around 3000 Eritreans were packed eagerly waiting his arrival, President Isaias Afwerki opened his speech by saying “You might think I am here with you after ten years, but on my part I have never been away from you even for a single moment”, and expressed his appreciation for the Eritreans living in the US and other parts of the world for their continued unreserved relentless rebuff. True to their heroic commitment to their home land and the rightful appreciation of the president the audience responded with huge applaud. The meeting of the minds took several hours and everyone in the audience came out satisfied of what he/she heard about the reality in the homeland. The tacking words from the President “… contrary to those dreamers who wish famine to exist, the people and government of Eritrea because they put the necessary infrastructure in place, created equal distribution of services and ensured equal participation of the people through increasing potential and because they worked hard and took the initiative to solve their own problems, no famine had existed in Eritrea and it would not exist in the future” were what the audience would have wanted to hear and tell the world that Eritreans are not the people that wait for handouts but to toil to feed themselves.

The many Eritreans who could not attend the meeting and were eagerly waiting outside for any miracle to happen they were paid off. President Isaias appeared on the street they were waiting and was met with, as one witness described it, “… with uncontrollable cheers of happiness and satisfaction. This emotional moment was so out of this world and even right now it is extremely difficult for me to explain it in writing. I just hope that someone had captured this moment on a video because it will be easier to see it or be a part of it rather than merely try to explain with few words. I mean to see PIA just to come to us and shake hands with us was a moment very close to UNREAL and extremely difficult to express it in writing.” It was a moment of extreme emotion and happiness for the people who had the chance of shaking hands with their president and feel his presence. They met with him physically and reassured him they will do what ever they could in order Eritrea to be a country where its citizens, wherever they are, live proud as Eritreans.