Regional Geo Congress to be held in Asmara 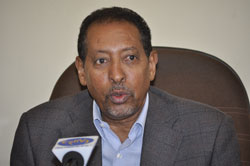 A Regional Geo Congress in which different countries and mining companies would take part would be held in Asmara from 4 to 8 October 2011.

Asmara, 30 September 2011 – A Regional Geo Congress in which different countries and mining companies would take part would be held in Asmara from 4 to 8 October 2011.

According to Mr. Alem Kibreab, director general for the Department of Mines  in the Ministry of Energy and Mines, the Congress is aimed at exchanging experiences among countries, and thereby ensure reliable mining activities, besides promoting environmental protection.

In view of the fact that Eritrea occupies a significant geographical location in the Arabian-Nubian Shield, as well as the prevailing peace in the country and the hospitable nature of the people, he explained that it is logical to host a Geo Congress. Mr. Alem further pointed out that the on-going mining activities in the nation are quite promising.

Delegates from different countries, internationally recognized Geology experts, mining companies operating in the Eritrea, Eritrean experts and investors of service-rendering institutions would take part in the Congress. Besides, different papers on the mining, geology, environment and its impact would be presented.