Role of so-called dominant and influential states on the decline: President Isaias 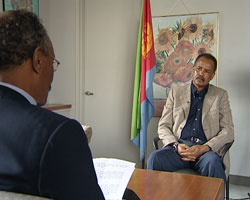 President Isaias said that the role of so-called dominant and influential states is on the decline.

Asmara, 1 October 2011- President Isaias said that the role of so-called dominant and influential states is on the decline.

In an interview he gave to local journalists concerning the address he delivered to the 66th session of the UN General Assembly and his visit in general, the President pointed out that the existing problem in the world is an accumulated one that it cannot be resolved on temporary remedy. In this regard, he elaborated that it would take time; such a state of affairs is bound to change eventually.

On developments in North Africa and the Middle East, he indicated that as such a scenario cannot be viewed in isolation and that as long as social justice is not ensured; the aspiration of peoples cannot be impeded. This is so because the existing confrontation between the people and special interest groups, as well as the response to that is similar, the President elaborated.

As regards Africa, he underlined that it is only when the continent clearly spells out its choices, promote inter-African economic ties and channel resources to the benefit of the people through properly exploiting its resources, and thereby assume its rightful place and role.

On the Somalia issue, President Isaias pointed out that as the domestic situation in that country is now different from the past years, and in view of the fact that the conception both at the regional and international level is changing, the possibility for the Somali’s solving their own issues and reaching common consensus, as well as coordinating initiatives are assuming good prospects.

Regarding the Palestinian issue, he indicated that although the right of the Palestinian people to self-determination and sovereignty on the one hand and Israel’s right to guarantee of security on the other is inviolable, the so-called continuous consultation for a solution that has been taking place over the past few years was in essence diversionary, in addition to being one that doesn’t focus on finding a solution. This being so, it was not accompanied by concrete steps towards ensuring the rights of both parties, President Isaias elaborated. Pending the emergence of a concrete option, “the so-called two states solution and ensuring membership for both sides in the United Nations” cannot have any significance beyond public relations exercise, he added.

On the question of restructuring the UN, President Isaias underlined that basic change and not temporary remedy needs to take place. He further explained that the authority of the General Assembly and its mode of operations should be enhanced, and that the world body should be transformed into an entity capable of organizing international relations on solid basis, besides making it one that genuinely promotes strong cooperation among nations, he elucidated. He also emphasized that the UN should be changed into an organization that effectively tackles problems rather than complicate matters.

Regarding the meetings he conducted during his stay in New York City, the President that the occasion represented an opportune occasion to get familiarized with each other’s state of affairs, deepen existing understanding and enhance bilateral cooperation, in addition to exchanging views on regional and international issues.

In connection with the extensive seminar he conducted to Eritrean national in North America and Canada, President Isaias said that the spirit manifested on the occasion portrayed the real picture of the role of Eritrean nationals in the Diaspora, besides highlighting the stage the nation has reached and the objective situation in the Homeland. “It constitutes pride to the nation and its people, as well as reinforce future hope,” President Isaias underscored.