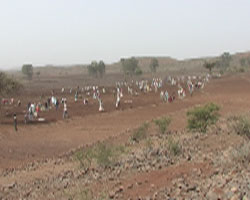 A meeting was held in the Southern region to discuss a five-year action plan.

Mendefera, October 4, 2011-  A meeting was held in the Southern region to discuss a five-year action plan.

During the meeting all government bodies were reminded to come up with budget proposal and timetable for all the work plans of the next five years, in addition to pinpointing the reality and the potential for the implementation of such plans.

As regards the agriculture sector, the action plan presented in the meeting focuses on raising production, preserving the environment and conservation of soil and water resources, as well as improving animal resources and range land.

According to reports, over the coming five years 810 thousand hectares would be cultivated, 11 million tree seedlings planted in an area of around two thousand hectares, 26 micro-dams constructed, and around 33 smokeless ovens produced, in addition to efforts for introducing renewable energy resources.

Regarding the education sector, reports from the Ministry of Education indicated that the participation of female students at all levels of education has reached 46%, and that vigorous efforts are underway in the opening of new schools, laboratories, construction of teacher’s residence, vocational training center and construction of sport fields in the coming five years.

All the ministries presented their respective five-year action plan at the meeting in which extensive discussions were conducted on the implementation phase.