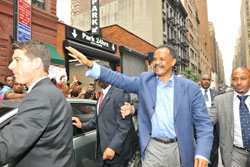 Ever since it was announced that H. E. President Isaias Afwerki will visit New York city to participate at the 66th Regular Session of the UN General Assembly, Eritreans in North America have been waiting anxiously and getting ready to meet the hero who has led the Eritrean people to liberation and who is guiding Eritrea on a road to a bright future together with his comrades, the Eritrean people and the gallant Eritrean Armed Forces.

The minute that the arrival of President Isaias Afwerki in New York was confirmed, there was an air of happiness, excitement, friendship, a renewed sense of patriotism, dedication to a common cause and unity. All talk was about hotel reservations, bus ride, rental car, what to wear, etc, etc… and just two days prior to the scheduled seminar for Sunday, New York and New Jersey started to large numbers of Eritreans arriving in bus loads and cars. Everyone wanted to be there early on so they can make sure to be ready for Sunday.

Early Sunday morning, as early as 5:00 a.m., volunteers, embassy stuff, organizing committee members and YPFDJ members from all over the US and Canada were present at the Hammerstein Ballroom very busy at work. Decorating the stage with colorful Eritrean and US flags; setting up the audio and video systems just to make sure that everything would work flawlessly. Outside the ball room, the crowd was trickling slowly and by 8:00 a.m., 34th and 8th street was buzzing with laughter, dancing, singing and ululating mothers, long time friends exchanging hugs and kisses. New Yorkers were dumb founded to see one of their most historic district invaded by such a large number of people wearing colorful traditional Eritrean outfits. Some even wondered and started asking what the gathering was about and the answers they got were “ President Isaias Afwerki of Eritrea is coming”, “Our hero is coming” etc.

Almost everyone in the crowd was wearing or waving an Eritrean flag. Every 10 to 15 minutes, buses continued to arrive and the crowd grew so fast that it covered several blocks creating a traffic jam. The police of course rushed at the scene to check the situation, however, all they found was a very large group of people gathered peacefully, holding banners praising their president and his leadership, some singing and dancing to Eritrean songs. With well over 4000 people gathered, not even one incident of altercation or unruly behavior was displayed by anyone and it has left a deep impression on the residents of New York and its police force. This disciplined, peaceful and utmost respect for the law is an identifying character of the Eritrean people where ever they may be.

One of the highlights of the event was when one of the security vehicles accompanying President Isaias Afwerki arrived at the front entrance of the Ballroom. Instantly, the crowd turned 34th and 8th street in to one huge sound source chanting “Isaias”, “Isaias” again and again sending shock waves across the city all the way to the meeting floors of the UN Security Council. It was a united and purposeful voice that told the entire world, especially to those who test its unity that “We the Eritrean People are One Heart One People and that we love our beloved country and leaders and we will stand with them through the thick and thin.” And make no mistake about it that that message of defiance and solidarity of the Eritrean people with our government have been delivered once and for all. It was a voice that calmed the waves of hate, intimidation and threats. As one Eritrean elder who was standing near me said, “ajona zom dekey Hizbi Eletrea ko hae inteylu hiko tselaetu yu zisebir”, very meaningful and heavy words.

Around 11:00 a.m., the Ballroom doors were opened and by 12:30 p.m., the place was full to capacity which forced the security staff to close the doors early leaving thousands of people stranded outside. It was a heart breaking and difficult thing to accept. People have travelled hundreds of miles to attend a meeting for a couple of hours and to be told they cannot come in was not easy, however, everyone just accepted the outcome and continued to carry on the happy and festive atmosphere.

Back inside the full ballroom, patriotic songs such as “Tsimblalie”, “Gezana” etc were blasting fully accompanied by a slide show of spectacular pictures displaying nation building projects happening back in Eritrea. Everyone was getting restless and anxious to see President Isaias Afwerki arrive some for the first time. Finally, the moment everyone has been expecting has arrived and President Isaias Afwerki entered the ballroom along side his comrades and it is then when the crowd went just absolutely crazy. Everyone was on their feet clapping non stop, and you can see a beaming smile everywhere that lit up the place. It was a brief moment of indescribable happiness. It has been such a very long time since I have seen our people being so happy especially in the last few years ever since the enemies of Eritrea have waged an all out war on everything Eritrean.

After a brief introductory message, reading poems, a speech by a young Eritrean idol, and a gift presentation, President Isaias Afwerki took to the stage and started his speech. As usual, it was informative, educational,

inspirational, thoughtful, wise and full of wisdom. Everyone was listening so intently that you could hear a pin drop. After President Isaias concluded his speech, a question answer session continued where people asked a variety of questions ranging from investment, the lifting of the unjust and illegal sanction on Eritrea, border demarcation, the care of martyr’s family etc… and after patiently and intently listening to every question, President Isaias gave clear and affirming answers to everyone’s satisfaction. Shortly after, he concluded the seminar by advising all Eritreans in the Diaspora to invest collectively in the different opportunities available in Eritrea, gain education and save money for future.

Realizing that there were thousands of Eritreans out side of the hall who were not able to get in due to space limitations, president Isaias surprised them by directly going to the crowd and shaking their hands. It’s is this types of acts of kindness, simple, humble and thoughtful nature along with his many other extraordinary qualities that make people love him and respect him dearly.

Throughout the entire seminar, I read all sorts of emotions on the face of President Isaias Afwerki. Most of the time, he was very much touched by the love and respect that we his people were showing him. Other times it was a deep sense of responsibility and satisfaction realizing that the Eritrean people trust him and are very supportive of the direction in which he is leading the country together with his cabinet of ministers and the mighty Eritrean Armed Forces.

Earlier during the week, H. E. President Isaias Afwerki was making great achievements in the diplomatic arena and concluded that historic week with an extraordinarily successful seminar in which Eritreans from all corners of the USA and Canada came ready to have a unique family affair. A celebration of the coming of their beloved, son, brother, elder, leader and a hero whom they haven’t seen for quite a while. It was a family affair in which all Eritreans came together as one people as they have done for centuries to catch up, discuss the affairs of their homeland and to renew their pledge and solidarity to Eritrea.

Thank you for your visit President Isaias Afwerki, you have brought us together again. You are a uniting force and a true leader who has dedicated his entire existence to the realization of the Eritrean vision. A vision of establishing a progressive, free and democratic Eritrea where all its citizens live in peace and harmony sharing the fruits of their hard work equally. You have laid a strong and solid foundation for us to realize this beautiful vision and with your leadership, I believe that we have already travelled far enough and I have no doubt that we will reach our final destination.  May God bless this beautiful family of which I am so proud to say am a member of! Glory to our martyr’s! Awet N Hafash!