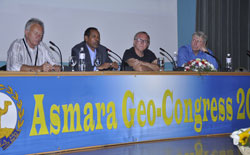 Owing to the mines potential deposits and reasonably fair mining regulation of the country varied companies that have been flocking to Eritrea are being engaged in exploration and mining activities. How the mining sector have been progressing, what geo-physical factors contributed to  the development of base and precious mining development in Eritrea and the potentials of  geophysical area where the country is located, that  is, the Arabian-Nubian Shield are among the major topics that could be raised in times where there is a growing interest of exploration and mining activities.  In such developments, the coming together of mining companies, experts in the field of geology and generally earth sciences, drilling companies, and networking among the companies that provide world’s latest mining and Geophysical survey technologies becomes a very timely concern for the development of a viable mining industry whose impact is well recognized globally. The Asmara Geo-Congress conducted at the Asmara Palace therefore discussed the geological structures of the Arabian-Nubian Shield, formation of mine deposits and prospects of mineralization and other mines related topics.

The varied topics presented by keynote speakers, have indeed enabled the participants of the congress to attain an up-to-date knowledge of the mining activities that have been underway in the country and the introduction of latest mining and surveying technologies. Progress of Bisha mining, Zara Gold project which is located within southern Arabian-Nubian Shield, and Asmara projects and potash deposit at Colluli in the Denakil depression of Eritrea were briefly highlighted in the congress.

The Bisha mining project that begun gold processing in early 2011 is expected to incept copper production in June 2013. Since, compliant mine deposits and a number of priority target areas have been identified for exploration and mineralization at different areas of the country, feasibility and pre-feasibility studies of the Asmara projects have been underway.

The Asmara project which holds four deposits in Embaderho, Adi-Nifas, Gupo and Dubarua has a good deposit of Gold, Copper and Zinc of which the Embaderho deposit is expected to be the largest of that of the world-class Bisha mining.  Likewise, the Zara Gold Project which has been developed by Chalice Gold Mines Limited has shown good prospects. With the agreement Chalice and Eritrea’s Mining Corporation reached, Zara Mining Share Company has been set up. So far, Chalice controls a total of eight explorations licenses within Zara and its vicinity. A world-class project is now being developed on an area of 547 Square km of the Koka Gold Mine. The congress highlighted that Chalice has completed a feasibility study in 2010 which asserted for the development of high-grade open pit operation with low costs and that would enable the project to rapidly advance.

Colluli is a high-grade potash project and is world’s shallowest deposit in just not more than 20 meter depth enabling it to be ranked almost as a surface deposit, which makes excavation quite easy and cost effective. Many

Mr. Zeray Leake, Country Manager and Chief Geologist of the South Boulder, who has been working with the company for the last 2 years, said that so far geophysical and drilling activities have been carried out, and that they came up with resource estimate of the area ‘A’ which showed a substantial amount of ore. “The good advantage of area ‘B’ is that it is very shallow and simple for mining and it does not have waste materials as well, ”Mr. Zeray said.

Mining activities are expected to rapidly grow in Eritrea.  The introduction of latest technology in this case is a necessity requisite. With an increase in the number of mining companies equivalent exploration and mining equipment need to be applied in order to correspond with the pace of the advances. Mining companies such as Chalice and others have been applying the VTEM (Versatile Time-domain Electromagnetic) system through which targets that are legible for drilling could be easily identified. Geo-Tech Ltd has been operating in Eritrea for the last 10 months in conducting airborne geophysical surveys through the VTEM System. According to Mr. Douglas H. Pitcher, Director of Geo-Tech Airborne Limited, Eritrea is the fist country to apply the VTEM technology in the Arabian-Nubain Shield.

Mines  explorations are mainly affected by a country’s  mining law, weather the tax law coupled with the potential deposit incentivizes any given company to invest in the Mining industry or not. Eritrea’s mining law has been reasonably fair which enables the country and the companies engaged in varied exploration and mining undertakings make benefits out of the resources.

Eritrea’s mining law is highly encouraging as compared to countries in the Arabian-Nubain Shield. As regards the prospects for Eritrea to be a hub of mining industry, Mr. Alasdair Smith, Geologist and Managing Director of Sahar Minerals, who presented a paper at the congress under the title “Chance Takers and Heartbreakers: case studies for Exploration in Eritrea” said that Eritrea already is a center of attraction. He also explained that the reason for Eritrea’s becoming the leading country in the Arabian-Nubain Shield is attributed to its fair and transparent mining act.

Mines exploration demands taking high risks, this being the fact many companies are still flocking to Eritrea and what could be the reason. Alasdair Smith from Sahar Minerals pointed out that even though there is a high risk but at the same time when discoveries are made it is a very profitable sector. Above all, he mentioned, risks are easily manageable for Eritrea is a corruption-free country.

Environmental and social risks were also among the major concerns of the congress. Eritrea has been much aware of environmental risks and the country is still protected from such hazards. What factor could make Eritrea competitive in the mining industry is a significant question that needs to be posed. According to Mr. Smith’s opinion it is the mining policy which makes Eritrea very competitive; the investors need to be sure that their money is protected by transparent laws and Eritrea is well a head of countries in the region in that respect.

A paper that focused on the development of base and precious metals mining in the Arabian-Nubian Shield in the next 25 years was also extensively discussed almost through out the presentations. The Arabian-Nubian Shield is largely endowed with mine deposits for this geographical area remains largely unexploited to date. According to Mr. Smith, this area has now become a frontier of mines exploration. Companies have been particularly interested in gold, zinc and copper but there have also been a focus on potash for potash has come on the scene.  Such a development has been in fact a wonderful development in Eritrea.

The Geo-Congress which covered almost every topic related to the geophysical and geochemical aspects of the Arabian-Nubian Shield has opened a venue for cooperation and exchange of views among geology experts and other companies who are engaged in the mining industry. The recent explosion that occurred in the Southern Red Sea Region of Eritrea due to volcanic eruption was also discussed in two presentations in which the participants of the congress forwarded suggestions for the development of cooperation among the countries of the Arabian-Nubian Shield and for exchange of data among varied institutions.

Finally, the participants held extensive discussions on the presented papers some of which stressed the need for the availability of a national geo-sampling and exploration map. In the closing remarks Mr. Alem Kibreab, Director General of the Department of Mining at the Ministry of Energy and Mines said that though very condensed the congress covered different topics of which some need further researches for their development.