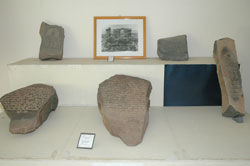 It’s no doubt that archaeological findings of past human activities lead one to understand the ancient time lifestyles his/her ancestors and integrate them with the development system of the present day. Through these findings of material remains and their proper examinations, successive generations comprehend the cultures and behaviors of previous human societies. Historians depend on these findings of historic and pre-historic sites to better enrich their writings inline with the written documents of different kinds. And as such, searching and preserving of these cultural or natural heritages of every society contribute a very important role for the attempts of reconstructing ancient ways of living. Recovering the peels of past human tradition is one among the methods of preserving the legacy of societal development. Although in its initial level, such kind of heritage protection beats a loud ringing sound in Eritrea. It has been a custom in Eritrea that everybody who happens to suspect that something out there has a greater importance in relation to history would inform the concerning body. In such a way so many historic and pre-historic sites have been protected from deterioration.

Awareness raising campaigns on the advantages of museums in maintaining our history helps the endeavors of preserving heritages in its professional standards of conduct. Every Eritrean is anxious to preserve the country’s rich heritage, be it natural or cultural. Tremendous efforts are always there to protect instances that would cause such noble bequests to fall out of use. Treating or preserving of heritages in such a way as to protect them from deterioration directly means keeping the legacy of society’s development process in chain.

Studies on past societies and evolution in those societies over extremely long periods of time support such kinds of protection processes to go through past social activities. Throughout the country, one encounters with so many historic and pre-historic sites, traces of the successive colonialism and the prolonged war for independence, ancient religious sites as well as norms and traditions of the people. Most relics we encounter recorded in the museums encompass all types of material remains contained in areas where they are believed to have been occupied by ancient humans. These records are identified and gathered through field surveys and excavations conducted by determined experts in the field. The work also has to pass through an extensive laboratory examination for their proper recording system. With its focus on maintaining culture and history way back to the ancient past, the National Museum of Eritrea (NME) looks on all forms of information about the human past including the studies on paleontological, archaeological and historical findings. Archaeological excavations that include fossils, food remains, the ruins of buildings, and human artifacts–items such as tools, pottery, and jewelry, or many other historical written records of different government archives, personal correspondence, and business documents help the museum to become center for reconstructing the past human history.

With all its efforts in fulfilling its objective in identifying, documenting as well as preserving and examining relics, NME also works hard to transfer and inherit the true culture and history of the nation to the younger generations. According to the style of their classification for better management systems, these relics are categorized as natural, archaeological, cultural, as well as traces of colonialism and memorials of the hurdles of 30-years-war for independence. Accordingly, some regions in the country have their own museum centers. These galleries are expected to play important roles in promoting advocacies regarding the preservation of relics, play role in educating people and providing reliable information of both tangible and intangible culture and history of the people. They are also expected to become both domestic and international tourism attractions.

With to the information presented by the Museum Department of the Northern Red Sea Region during the symposium they conducted on the occasion of 20—years of independence, it was reported that around 45 ancient cultural heritages were identified and documented from nine sub-regions of the region. Among the different archaeological findings and excavations conducted in the region, a 27-28 million years old fossil of elephant species that have gotten an international recognition is found around Dogoli.

The new discovery which is believed to have filled the gap of 24-34 million years of elephant evolution is named Eritreum melakeghekristosi after an Eritrean, Melake Ghebrekristos, who discovered it, according to the report. A skull of Homo-erectus that was discovered in 1995 at Buya is another important scientific finding that indicates the traces of living things and their environmental changes and different stone tools used during the ancient times. A very significant site is also Abdur believed to be the first place where human beings started to exploit the sea resources 125,000 years ago. The list of such kind of sites is endless, and so is in their variety. Kitchen staff, tools and potteries witness ancient human activities found in every island and along side of the coast line and bays.

Due to the fragile nature of theirs, many of the objects left behind by past human societies have negatively affected the ancient histories of our ancestors, as they disintegrate over time. Nevertheless, durable items such as pottery, tools or buildings of stone, bones and teeth that survive for millions of years help scientists to rebuild the past human life. Despite the incomplete information of the material remains about the past societies, they are capable enough to uphold the pillars so that the easier the work becomes for the scientists to fill the gaps of the disintegrated delicate objects. For the fact that history mainly relies on written documents, historians depend entirely on material remains for tangible evidence of the pre-historic period.

Not differently, ancient wrecked ships and kitchen utensils and so many other material remains of the Eritrean Sea coupled with the other findings of jewelry and ornaments along the coastline will contribute to the reconstruction of the history of the Red Sea Trade Route. Eritrea owns both on land and under water relics, ancient historical places, diverse cultures and heroism with their unique significance to write a very reliable history. As such, Museums, Scholars and Universities flow to Eritrea and conduct explorations and excavations in the most ancient and inclusive for all types of societies and cultures extending from the whole region of East Africa to the Far East, and from the Mediterranean to the Indian Ocean. Besides the aforementioned material findings, different cave and rock arts, findings of life styles, stone carvings, land layers that depict vegetation cover of the ancient times, stone hinges, architecture and art deco styles of the different colonizers with their military traces and tombs are found dispersed but treated well throughout the country. Religious vestiges, including Turkish, Arabic and Roman type of architecture of Massawa port city that had served as a gateway to inland countries of Africa to have a good connection with Europe, as well as the Middle and Far East during ancient times, reveal history of shared cultures and the introduction of civilizations and other influences of the ancient societies of the surroundings.

The Holly site of the Sahaba Mosque (615) and the Monastery of Debre-Bizen (1368) are some among the others to represent that both Christianity and Islam were introduced through the gate way of the Red Sea in the 4th and 7th A.D.

Military Developments between the Strategic Withdrawal and the Second Congress