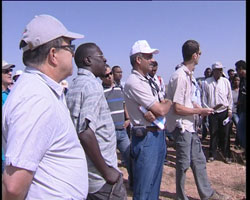 The Regional Geo-Congress of ‘Arabian-Nubian Shield’ in which over 300 participants, including representatives from different countries, mining companies and exploration, world recognized geo-experts, investors and service-rendering institutions took part concluded today.

In the congress that opened on October 4, a number of study papers by experts focusing on mining sites and exploration, the stage reached in the Bisha Mining and technology it’s applying, the activities of Zara Project, mining exploration in Debarwa, discovery of potash, the incidence of volcanic eruption in the Southern Red Sea region and the like were presented on which extensive discussion was conducted.

Moreover, in-depth discussion was conducted regarding mining prospects of the ‘Arabian-Nubian Shield’ in the next 25 years, potash resources in the area, the income that states should obtain and technology they are applying, as well as agendas related with environmental protection and preventing the pollution of water resources.

In addition, the participants of the congress visited mining sites in Eritrea in which studies and exploration activities are being undertaken, i.e. the environs of Embaderho, Adi-Nifas, Bisha and Debarwa. They also received briefings by experts of mining companies deployed in the area.

In the course of the visit, the managers of the mining companies operating in Eritrea said that they were able to invest their capital in the country encouraged by the nation’s concise mining policy, besides the existing peace and stability in the country and its precious mine resources. In this respect, they expressed conviction that Eritrea is an attraction for mining companies, and that it would occupy a special place in mining in the near future.

Reports also indicated that the managers of the companies conducted a visit to places along the Asmara-Massawa route, port city of Massawa, Dasen Island and others with a view to getting familiarized with Eritrea’s natural, geological and tourism resources.