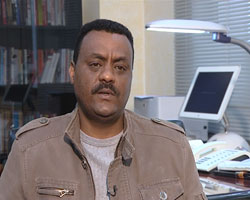 Mr. Ali Abdu pointed out that the on-going jamming offensive against the Eritrean media outlets is part and parcel of the concerted anti-Eritrea acts of hostility.

Asmara, 10 October 2011 – Mr. Ali Abdu pointed out that the on-going jamming offensive against the Eritrean media outlets is part and parcel of the concerted anti-Eritrea acts of hostility.

In an interview he conducted with Erina, Mr. Ali recalled that the acts of armed provocations during the past 13 years and later on clandestine psychological conspiracies and encirclement were designed to weaken the Eritrea people and keep hostage the nation’s economic and development strategy, as well as undermine their unity and independent path, in addition to disintegrating future generations. “The on-going jamming conspiracy aimed at impeding the people’s independent path as well as potent voice is an integral part of such open hostility, and that it should be viewed within the context of this broad enemy ploy, the authors of which are the same architects of all acts of sabotage,” he elaborated.

At a time when the Eritrean people are reinforcing the progress registered on the political, economic, diplomatic and cultural fronts, it is inevitable for external hostility to be simultaneously escalated, Mr. Ali underlined. He further explained that one should not expect the forces standing against an independent voice and staunch rebuff to put an end to their futile acts of suppressing the truth.

Mr. Ali explained that as part and parcel of its major strategic programs to build a development-oriented media- keeping intact the chosen path and without falling hostage to futile squabbles – is in the process of drawing up infrastructure and technological capacity, program expansion,  upgrading quality, expanding radio and TV stations, introducing internet broadcasting,  electronic newspaper, expanding satellite lines, medium wave broadcast stations for the Horn region, FM broadcast in different areas and developing human resource potential, among others in the next four years.

Parallel to these action programs, resort should be made to formulating a strategy that would enable the youth inside the country and abroad play effective role in unison, operating within a set plan and without giving room to wastage of resources and capability as regards the continuing national rebuff in the mass media, he added.

Moreover, Mr. Ali underlined that at a time in which media outlets are becoming fields of confrontation between truth and lie, and vehicles of information dissemination, raise people’s knowledge and awareness and reinforces their rebuff strength, the media has nowadays become a field of confrontation for information and reality”. He further indicated that as it is a natural phenomenon to witness conspiracies unfolding for every shining progress made by the Eritrean people, enemy quarters are trying to jam the country’s media outlets which ensured the freedom of the people’s voice and  upholding the truth through  developing instruments that would suppress truth and spread lies.

Furthermore, Mr. Ali pointed out that in the 21st century in which the awareness of people is high with the opportunity of owning modern technology, their attempt to jam Eritrean media outlets with outdated methods already obsolete before 60 years will not create any cause for worry other than amplifying their historical failure.

Mr. Ali underlined that as enemy quarters have witnessed that the Eritrean people who emerged victorious against their psychological warfare would not put their values and reputation for sale, and in view of the fact that the same forces fully comprehend that people with honor and value would not serve their agenda, they will never have affection towards us. “It is also well understood that on our part we will never have affection towards them, because they detest our honor and values. Hence, in recognition of the fact that the journey would not be short and easy, we have to prepare ourselves for prolonged rebuff,” he underscored.