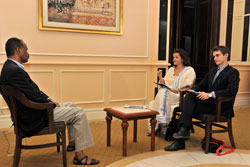 In an interview he conducted with the Shanghai Daily newspaper today, President Isaias pointed out that concerted action is being taken to develop Eritrea’s comparative advantage in collaboration with China.

Asmara, 11 October 2011 – In an interview he conducted with the Shanghai Daily newspaper today, President Isaias pointed out that concerted action is being taken to develop Eritrea’s comparative advantage in collaboration with China.

Stating that “our partnership with China is a model”, the President explained that Eritrea with its strategic location in the Horn of Africa, its political stability, societal harmony, hard working people, clean government and clear laws and policy, coupled with the substantial investment made to put in place the necessary infrastructure, make Eritrea attractive for trade and investment, and that Eritrea’s partnership with China aims at developing all sectors for mutual benefit.

Indicating that  the tourism and fisheries sectors, being not yet fully exploited  with ample investment opportunities,  besides being the priority of priorities for Eritrea in endeavors to ensure food security, President Isaias underlined that  this national assets are open for Chinese investors and Eritrean nationals, on top of working in  partnership.

In the interview that mainly focused on Eritrean-Chinese relations, the progress of the nation’s development programs and the available opportunities for investment he indicated that the Bisha Gold Mine Project is the tip of the iceberg of the huge mining opportunities in the country. President Isaias further explained that the revenue to be generated thereof would be allocated for development of other investment sectors that will have major impact on improving the living standard of Eritrean citizens, including the future generation. The President further underscored that the fact Eritrea is standing on firm ground at a time in which the countries of the Horn region are suffering from famine and hunger is the outcome of the ongoing investment in the country, though a lot remains to be done.

Moreover, President Isaias pointed out that China is Eritrea’s main trade partner, and that his recent meeting with the Chinese Foreign Minister in New York City focused on strengthening the existing programs and the role of the PRC in promoting regional integration and stability, as well as China-Africa relations. In this regard, he underscored: “China has moral obligation not only to promote development partnership in Africa but also make due contribution in resolving problems in the continent.”

Noting that at the time when the US and European economy is on the decline, and that with an objective assessment of the situation, the scar will not be that easy to heal,  President Isaias said that in order for the Chinese leadership to continue playing due role, it is imperative for China to strive for ensuring alternative market. In this regard, he said that China needs to make substantial investment in the African continent, as no real development would be achieved through aid and handouts.

Underscoring that “clean government constitutes the greatest asset in investment”, the President emphasized that not only do obstacles ensue but also no positive change would witnessed at all. Besides, the negative consequences resulting from such a scenario are inevitable, he elaborated. President Isaias also stressed that as the malaise of this nature is undermining the development aspirations of many African countries, china is called upon to foster relations of partnership, and thereby serve mutual benefit and social justice.

In concluding remarks, the President said that the achievements registered in Eritrea since independence has laid solid ground, and that the challenges ahead are to accomplish the remaining tasks. “We are working with our Chinese partners to go beyond ensuring food security,” he elucidated.