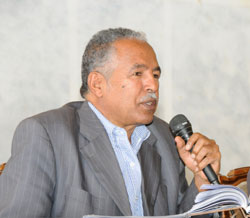 Campaign is underway to keep intact the cleanliness of Asmara city, stated Mr. Kahsai Gebrehiwet, Administrator of the Central Region.

Mr. Khasai also explained that guidelines have been given to all sectors of the administration regarding the effective implementation of the campaign. The plan will register significant outcome in line with the introduction of community-based cleaning practice in various regions of the country, he added.

The Administrator also pointed out that efforts are being made, alongside the renovation activities by Eritrean Telecommunications, The Electricity Corporation and water resource Institutions.

Mr. Kahsai further indicated that micro-dams in the region have impounded enough water thanks to this year’s good rainy season, and called on the general public to make judicious utilization of water resources.