Eritrea Festival in Riyad being conducted with patriotic zeal 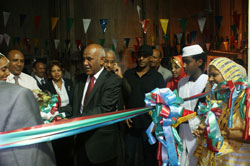 Mr. Abdalla Jabber, Head of Organizational Affairs at the PFDJ, opened the festival after inaugurating an arts exhibition staged by students and female members of the Eritrean community in Riyad. In a speech he delivered at opening ceremony, Mr. Mohammed Omar Mahmoud, the Eritrean Ambassador to Saudi Arabia, said that the festival is taking place at a time when the country is standing in solid grounds.

He further indicated that the continuous enemy conspiracies have been dealt staunch rebuff of the people and Government of Eritrea.

The head of the Festival coordinating committee, said Mr. Estifanos  Tsegai, on his part that Eritrea festivals held annually convey strong message, in addition to  playing vital role in strengthening the national rebuff.

Certificates were handed by Mr. Abdalla Jaber to students who scored high marks in the national secondary school leaving examination and the 8th grade national exam.

Eritrea Festival in Riyad and its environs would continue until October 16.