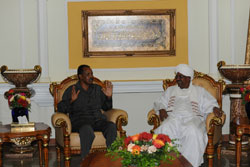 In a meeting they held in Khartoum yesterday, Presidents Isaias Afwerki and Omar Hassen Al-Beshir discussed the development of bilateral relations and regional issues of mutual interest.

Asmara, 20 October 2011- In a meeting they held in Khartoum yesterday, Presidents Isaias Afwerki and Omar Hassen Al-Beshir discussed the development of bilateral relations and regional issues of mutual interest.

In a statement he made to media outlets, President Isaias explained that his visit aimed at enhancing the historical and strategic relations between the people of both countries. He further indicated that as the current visit is taking place under new circumstances following South Sudan’s achievement of sovereign status, his talks with President Omar Al-Beshir on diverse issues and the mutual exchange of views, as well as fostering mutual cooperation are imperative.

Moreover, as the visit is taking place at a time when new developments both at the regional and international level are being witnessed, the strengthening of Eritrean-Sudanese ties that take into account the current global changes is of vital significance.

President Omar Hassen Al-Beshir said on his part that relations between the people of Eritrea and Sudan are historic and long-lasting. “It is a people-based relationship built on firm mutual cooperation.”

Meanwhile, President Isaias visited Al-Elefun in which agricultural and animal breeding activities are taking place, during which he was briefed by heads of the institution regarding the application of technology and equipment. He also visited a dam in the Northern Sudanese Region which plays important role in the country’s development drive, besides the tourism site of Merewoe, as well as hospitals.

In the course of his visit to Merewoe, President Isaias was given briefings by experts on the impetus that the dam would provide to development endeavors. He noted that the Merewoe Dam would make vital contribution to the strengthening of economic ties.

Eritrea Festival in Riyad being conducted with patriotic zeal