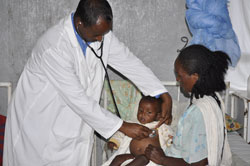 Many cities, towns and villages would have been disconnected, had it not substantial efforts been exerted to alleviate such a barrier. Vivid deficits of water would also have impeded development programs in larger areas, many nationals would have suffered from treatable diseases merely due to lack of health care facilities. The remote parts of Eritrea would have lagged behind from the fairly advanced cities and towns of the country. Nevertheless, such difficulties have been solved or substantially alleviated. Let’s have a look at the development undertakings of the Areza sub-zone.

The Areza sub-zone comprises 106 villages that are grouped into 22 administrative areas. This sub-zone has 84, 213 inhabitants, who earn their living through farming, pastoralist and some also involve in trade activities. Like most parts of Eritrea, this sub-zone was heavily disadvantaged in terms of social services of any sort. Notwithstanding its prior status, owing to the putting in place of diversified infrastructures throughout the country, this sub-zone is now in a better position.

Like many sub-zones in the Southern Region, the Areza sub-zone used to have limited or no facilities of any kind. Agricultural activities were conducted traditionally and based on seasonal rain. Though traditional farm practices are still in use, with the introduction of modern farm machinery and equipment and most significantly the construction of water reservoirs, about 125 thousands hectares of land have been put under cultivation through irrigation system, most of which have been fruits and vegetables farming. Around 70 water reservoirs of varied sizes have impounded good amount of water and are expected to enhance the irrigation based farm practices. In this year’s summer time, 17 of the 21 administrative areas of the sub-zone are expected to collect a bumper harvest.

Modern dairy farming has also been introduced with forming associations that embracing 111 members. As part of securing the needs of animal feed, in the villages of Adi-Nifas, Zrbien, Ziban-Debri, Adi-Guroto and Degumbiet a total of 550 hectares of land is now protected as enclosure.

Trade activities have been steadily advancing in the Areza Sub-zone. More than 350 business firms in Areza and Mai-Dma have been rendering services of vital importance.

Regarding education service, let alone in the Areza sub-zone, there was no sufficient access in Mendefera- the capital of the Southern Region. Now, 36 schools have been rendering educational services from kindergarten

through secondary school. Of the total number of schools in the sub-zone, 35 have good infrastructure which is a requisite for good teaching and learning atmosphere. In this academic year, 17, 270 students are perusing their education at all levels. But, such achievements are not enough and there is a need a lot to be done. There are still lack of classes to accommodate students in a smaller number and lack of sufficient number of teachers could be cited as a major challenge of the educational service. To address such challenges, there is great expectation for the construction of new schools such as:  junior schools in Degumbiet, Adi-Nifas, Aykebetsu and a secondary school in Ubel.

The inhabitants of the Areza sub-zone have been availing themselves with potable water supply with construction of dams, reservoirs that have been put in place in their respective locality. Efforts are also underway to reach satisfactory level of potable water distribution to each village in the sub-zone.

There is also a fair service in communications and roads networks. A road route that passes through Mendefera, Areza, Mai-Dma, and Molqui is the major road in the sub-zone. Other road networks include a route that pass through Mai-Dma, Ubel to Mai-Mne and also a road from Uble to Emni-Hayli. Mobile telephone services have been introduced, but it has not yet covered the entire sub-zone. With the construction of two new telecommunications service stations at two sites of the sub-zone, however, there would be no disconnected area be it in roads network or communications services.

Even though there remains much more to be done, the Areza sub-zone is not lagging behind in the provision of basic social services.