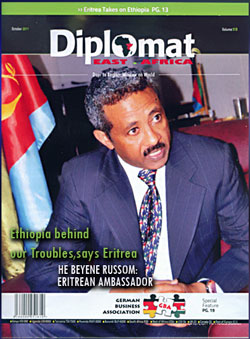 Is it true that the Eritrean Embassy in Nairobi is used as a conduit to fund terrorism in Somalia?

No, our Embassy is very clean and it has not been involved in any such activities. The accusations are baseless. I challenge anybody to come with any proof that this Embassy is involved in activities that go against the Laws of Kenya. We have always stood firmly against terrorism in principle and deeds. Let alone as a government, even during our long years of liberation struggle there is no element or trace of terrorist activity in our history. It is against our tradition and our principle.

But why is Eritrea facing the accusations?
All this is the work of Ethiopia. They make us look as the aggressors while we, in fact, are the victims. They refused to honour the verdicts made by the Eritrean-Ethiopia Border Commission in 2002. They are still inside our territory (in Eritrea) and in Badme with their troops and tanks in violation of the UN, AU, the USA and the European Union-sponsored Algiers Agreement and the final and binding verdict of the EEBC

Did the UN Monitoring Group that compiled the report contact you before making it public?
They did not contact me. Where they conducted their investigation is a mystery to me. They might have been in Eritrea and worked discreetly. We should have been given a chance to defend ourselves. To ask them where the proof is, where did you see this? Why are you doing that? In fact, they leaked it to the media before it reached the Security Council because Ethiopia has been part and parcel of the so-called 400 page document of the UN monitoring group.

How comes Eritrea is not defending itself against the accusations?
We are defending ourselves, but the accusations keep piling up. While we are too busy trying to defend this accusation, another wild one is created. But sometimes we wonder why such wild, senseless, illogical and bogus accusations and delusions manufactured in Addis Ababa reach the heads of journalists. Why for example, should Eritrea try to destabilise South Sudan and why should we train people to bomb Kampala? What would be the interest of Eritrea? Any credible journalist should ask and try to find out why, before publishing a marketable and sensational story like ‘Eritrea accused of training terrorists to bomb Kampala, the AU seat in Addis’…etc and endless accusations linked with Al Shabaab and Somalia.

Why don’t the media ask where the proof is? And why would Eritrea waste so much money and effort to destabilize South Sudan for which it has worked tirelessly and for years to reach this amicable solution of the long conflict between the southern and northern peoples of Sudan? And why Kampala, so far away from the Eritrean borders? We are even very worried that these accusations will spill further in the region to Chad, Congo or Rwanda. If something happens in Rwanda now, they might accuse Eritrea again.

No country can prepare itself against such outrageous lies unless you have such kind of behaviour and tradition. Unfortunately, Eritrea doesn’t have such history or tradition and that might be the reason why we are always being taken by surprise. They (Ethiopia) are succeeding in manipulating the media and creating a bad image of Eritrea because the ruling regime of Ethiopia – the Meles Zenawi group – has such a notorious tradition which has destabilised the whole region and succeeded in creating a negative but temporary image of Eritrea.

What steps have you taken to clear yourself of the accusations?
We are appealing to the UN and are speaking to the Governments in the region. It is not only that the accusations are baseless and without proof and evidence, but they don’t emanate or originate from the countries of the region. Uganda has never accused Eritrea of any wrong doing in Kampala and neither did the SPLM of South Sudan. We opened our Embassy in Juba long before any country in the region. Kenya has never pointed a finger at us over the accusation that our Embassy finances or transfers weapons to Al Shabaab.

The paradox is that you are accused without an accuser and without the evidence. The only origin of all these ill-intentions and lies against Eritrea is Ethiopia on behalf of other countries. This would be a very interesting but funny case in the law.

But now that we are back in IGAD, it will not be long before we are able to assert our proper position and work for the benefit of the region. Peace and development as the name IGAD stands for.
Did the Kenyan government conduct any investigations?
I have spoken to Government officials and told them that my job here is to work for the interest of both countries within the context of diplomatic rules and norms and within the Kenyan laws as well. We have never done anything that jeopardises our relationship and or against my diplomatic duty by transferring money or weapons to Al-Shabaab. The Government of Kenya has never accused me of such things. They must have done their investigations in their own way.

Is it true that Eritrea is supporting rebel groups inside of Ethiopia?
No. In fact, on the contrary, in March Meles Zenawi, the Ethiopian leader, said publicly that his government shall use all means available to see a regime change in Eritrea. Ethiopia, while asking the international community for millions of dollars as aid for the famine in the country has purchased 200 tanks and other armaments again announcing the purchase publicly as if the weapons of destruction are tractors and tools for farming. To everybody’s surprise the donors, international community and the media have said nothing or very little. The Government of Ethiopia has been very active for the last decade arming Eritreans and conducting terrorist activities against my country. They have tried creating groups from some of the Eritrean living in Ethiopia and even in the Diaspora. But, of course, to no avail.

Why has Eritrea rejoined IGAD?
With the emergence of South Sudan, the problems of famine and drought in the region, the further fragmentation of Somalia and also the factor of peace and development of the region, we think we can now play our role more actively in IGAD. And we are not joining IGAD now. We have been there since early 1990s. We are only reactivating our membership.

What is Eritrea’s response on the recent IGAD meeting where the Eritrean Representative was blocked from attending?
It is very sad to hear such kinds of stories. It is only Ethiopia that is trying to block us against the charter or the law of IGAD – the reactivation of our membership. In protest at the Ethiopian invasion of Somalia in 2006, we froze or suspended our membership and now when we have decided that it is the right time to be back in IGAD, we are, according to the rules and regulations, automatically there. And to that effect, the countries in the region have not only accepted us happily but they have been asking Eritrea to come back to IGAD because we are part of the region. They wish to see Eritrea in peace and developing and most important because Eritrea has never withdrawn its membership from the organisation. No wonder Ethiopia is fighting hard to prevent Eritrea from coming back.

Your Excellency, you cover diplomatic duties in the whole of East Africa?
Yes, but now we are upgrading our diplomatic presence in Kampala to Embassy level. I cover Tanzania.

Do you have an embassy in Ethiopia?
No, we do not have diplomatic relations with Ethiopia since they invaded Eritrea in 1998 when they expelled our Ambassador who was also our representative to the African Union. They also expelled the whole embassy staff and ransacked and confiscated our properties, vehicles and all documents against international laws and norms. Since Addis Ababa is the seat of the AU, we could not be represented in the organisation because the Ethiopian Government refused to allow the presence of any Eritrean diplomat in the capital. That is why we were not also active in the AU.

Is it true that Eritrea and Ethiopia have now taken their border wars to Somalia?
Is that the so-called proxy wars? We had very good relations with Somalia. We were both colonised by Italians. Until 2006, we were working together with Ethiopia, Kenya and the region for peace and stability in Somalia until Ethiopia again suddenly invaded Somalia violating the UN Security Council resolution 1726 that prevents frontline counties to intervene militarily in Somalia. And as a manifestation of protest, because IGAD didn’t stop or condemn Ethiopia we suspended our membership from IGAD.

Since then every now and then without respite, accusations of lies and fabrications pile one over the other against Eritrea mainly by the Ethiopian Government, only to camouflage its illegal occupation of part of Eritrea, it’s wrong doings inside its own country and the bullying of the region.

Of Ethiopia’s accusations against Eritrea, will it reach a point where Eritrea will say enough is enough?
No. It will come to an end. I believe it will come to an end because at some point people will see through it all. If serious media people, not those bought, try to find out what is wrong, it will end.

What is the human rights situation in Eritrea?
I can talk at length about the meaning of human rights. People should know their human rights for equal opportunity, for their right services to health and education, for their right to participate in the daily social and administrational affairs. The freedom of speech should be linked with these things. They just should not be hollow and without meaning.