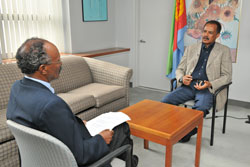 It is to be recalled that during his stay in New York to attend the 66th UN General Assembly session President Isaias Afwerki held discussions with leaders and officials of different countries. He also conducted an extensive seminar to thousands of Eritrean nationals living in the US and Canada. Upon his return home the President conducted an interview with the local media. Second part of the interview follows.

Mr. President, it is to be recalled that you had several bilateral talks and discussions on ideas promoting the political, economic and social resurrection of Africa. What are the opportunities and challenges facing Africa? And how can Africa channel its human and natural resources towards cooperation at regional and continental levels?

For the past 30 years or more, Africa has been far back on the list of continents. This is not because its people are black, illiterate, or uninspired. We might attribute the reason to colonization, but even after independence, changes were hardly seen. Colonial heritages and subsequent regimes couldn’t meet the expectations of Africans, and consequently, Africa was forced to fall behind. And it needs to spell out its choices clearly in order to leap forward. This however cannot be achieved through foreign aid or sympathy. Only when Africa exploits its immense resources and investment opportunities, and channels it towards benefiting its people and improving their living standards, can it assume its rightful place among the other continents.

And for this to materialize, Africans need to do their ‘homework.’ Earlier, we had the “Organization of African unity” but it failed to realize its intended objectives. It was reorganized and reestablished as the African Union, but even this body did nothing to bring any change in the past 12 years. And it has been so far impossible to form a continental body with the desired efficiency, thereby resulting in the worsening of the existing problems. For Africa to step out of this trap, it therefore needs to promote inter-African ties and fully utilize its resources. It is indubitable that a huge task awaits Africans and the present regional and international scenarios that we are witnessing only attest to such African vulnerability.

What about the situation in Somalia; what can be done today, after 21 years, to bring a solution to the Somali issue by the Somali people as well as Africa and the world?

There is nothing new really. We could say there are better prospects maybe because the internal factors such as the warlords’ situation and the inter-clan fighting have worn out and because the awareness at the domestic level is relatively better. The change in conception both at the domestic and international level has been attained but the question remains what should be done for it to serve the interests of the Somali people. There are Somaliland, Puntland and Mogadishu. And then there is the Transitional government, regardless whether it is officially recognized or not. But Somalia in the world map is presented as a whole and not in chunks of land. And the attitude nowadays is trying to address that issue, bringing all sides together in the political process and thereby find a viable solution. This may not be the ‘final solution’ but it has definitely paved way for reaching common consensus and coordinating initiatives, and they are all assuming good prospects.

In the end, the cause for all the problems in Somalia in the past 20 years is the power vacuum. And this problem can only be solved by the Somali people themselves, provided of course they have an efficient government system. Then, the Somali can deal with remaining issues of fundamentalism, piracy and famine, if any.

The most important thing is therefore to ensure that any effort to bring a solution in Somalia should guarantee the equal participation of all the Somali people. Any other external actor should only facilitate such a possibility and not intervene as a self-appointed replacement, as we have seen being tried and failing miserably. If the Somalis are not left to deal with their own issues, any political processes like those we have seen attempted in the past 20 years can hardly be successful.

You also keynoted in your address regarding the “current drive for U.N. membership for Palestine” and stated Eritrea’s genuine concern lest it might “become a symbolic battle bereft of real substance”. What are Eritrea’s concerns as well as possible near and far courses of action in the future?

All countries have the right to uphold a certain policy. While Palestinians’ inalienable right to self-determination and to a sovereign statehood, or even of any other nation, is neither to be denied nor determined by some other nation on account of favoritism, Israel, on the other hand, has the right to avert security threats against its very existence. There lies a procedural problem in the endeavor towards bringing about solution. All the attitudes and courses of action that invariably prevailed for almost two decades have proven to be futile, owing to the fact that the Palestinian choice in the past twenty years has been but persistent engagement in diversionary negotiations. On top of internal fragmentation, all arrangements that have been attempted after every contingency have failed to serve the Palestinian right to self-determination. Contingency plans which are constantly being designed on the part of Israel in a manner that breaches the rights of Palestine and threatens its national security have as yet failed to serve either party any good. How is the so-called two-state solution–ballon d’essai repeatedly put forward through external influences for PR advantages–then expected to culminate in concrete outcome other than prevailing a climate of beating around the bush? Ridding of the aforesaid trial balloons, nonetheless, the two parties must come up with another realistic course of action that takes account of geography and timeframe, thereby guaranteeing the rights of Palestinians and Israelites. With the constantly unfolding scenarios in the Middle East and the global mutation, persistent motion has in recent times been lobbied for full U.N. membership for Palestine. Such move, which is now and again in default of concrete international support amounts to a temporary remedy by merely slowing down the attainment of a sustainable solution. Apparently, heated image management on Palestine’s full membership is technically unconstructive with respect to proponents’ vis-à-vis opponents’ vantage point. Had it been voted for, the current drive, which exhausted itself virtually for the past two decades, would obviously not have been an end in itself in changing the reality on the ground.

Southern region: Discussion on action plan regarding literacy campaign for 2012