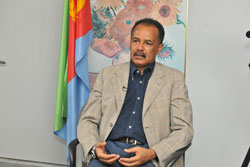 It is to be recalled that during his stay in New York to attend the 66th UN General Assembly session President Isaias Afwerki held discussions with leaders and officials of different countries. He also conducted an extensive seminar to thousands of Eritrean nationals living in the US and Canada. Upon his return home the President conducted an interview with the local media. Third  part of the interview follows:

In relation to the aforementioned global change, there has been a continual urge for the world to have a representative organization, which appositely addresses the existing international reality. But none has thus far submitted the modalities of a proposition as regards the desired transformation on UN. What should the systemic transformation comprise and how should it enter into effect? What is Eritrea’s stance on the key elements of change?

Virtually two decades have elapsed since the urgency for UN’s systemic transformation was set in motion. Why has then the real reform on which many countries across the world profess agreement failed to take effect? Formed in the wake of World War II, the now outdated UN, whose institutions and procedures risk becoming totally irrelevant is no more capable of handling international relations, reinforcing interstate cooperation, or, operating as an international organization to resolve problems when they arise anywhere through efficiently providing with requisite facilities instead of exasperating them. Conflicting courses of action in every continent, every region and sub-region have now expanded out of control. As I stated above, despite the politically correct goodwill, there are forces for and against the transformation operating on the sly. The reality with the handful anti-reform forces is that contemporary organizational approach allows a room for domination and adventurism unless the current method of work and procedures are overhauled.

Besides these well-known special interest groups, some of the emerging and re-emerging nations are also hungering after permanent membership in the UN Security Council or a conferral of veto power. The verbal agreement by the majority of nations aspiring to make a clean sweep with marginal power and influence has in the past twenty years enabled anti-reform forces to obstruct the move with shifty ifs, ands or buts. All attempts have thus been resorted to complacency and mere fine-tuning of the size and composition of the UN Security Council, as well as conferring veto power upon would-be permanent members of the Security Council in place of the systemic transformation.

The UN General Assembly, where this paramount body has simply turned out to be an occasion of keynote speeches, needs to be invested with real decision-making powers and due method of work for the systemic transformation to go into operation. The UN Security Council itself–an organ that has assumed so-called supreme powers–has also been manipulated over the past decades by a handful of permanent members: perhaps you can even pinpoint a single nation. The incongruity between these two organs, however, is that the General Assembly is deprived of real decision-making powers.

Composition of the Security Council and the defined limits of its powers will have to fundamentally take stock of current global contexts. Delivering mere keynote addresses of reform every year without overhauling the existing method of work and procedures has become an apparent pattern so as to evade the key item. It might be too early to deduce that real reform could be attained through proactive engagement prior to the maturity of the constant shift in the balance of power, albeit indicative. To this end, all adherents of change should press ahead through consorted endeavors at continental or regional levels, in order for the process that has been delayed for almost two decades between the proponents and opponents of change to be expedited.

Mr. President, you held bilateral talks with several state leaders. Although it might differ with each meeting, can you tell us the general focus of the discussions held?

Well, there were several issues entertained. We had the opportunity to intensify or deepen further the existing understanding of each other’s state of affairs in addition to exchanging ideas on issues pertaining to the region

and the world as a whole. We also discussed on how to build and maintain bilateral cooperation.

There were talks on self-reliance, famine or the situation in the Horn of Africa for instance and discussions were held on the ‘possible or viable solutions.’ There were also consultations on trade and investment opportunities. The topics were addressed with the countries concerned. It was in general an opportune occasion for exchanging views.

You also held a seminar with Eritreans living in the US and Canada. It’s to be recalled that in its recent meeting where it discussed the foreign affairs agenda, the Eritrean Cabinet of Ministers had congratulated the Eritrean people for its integrated rebuff to the multifaceted acts of conspiracy in the past 12 years. How do you assess this? Where did this strength come from? And what can be done to take it to the highest level?

I believe that the seminar was really an occasion where the true role of Eritreans was manifested. We can hardly say we have ambassadors abroad as every Eritrean is his or her country’s ambassador. To see Eritreans organize such an event, amid countless threats and hostilities, is really worthy of pride and admiration. That really demonstrated the spirit of the Eritrean people as not only emotional but strong and resilient as well. It also gave a tangible picture of what we have been accustomed to hear. To see the community scoring dynamic changes in its organizing capacities is in itself a testimony of its bright future.

What is more heartening and worthy of pride here is the role of the youth. To witness such a vigor sense of nationalism on the youth and children alike was admirable. Such zeal and patriotism at that age was not a PR campaign but rather something that we used to hear and that we now saw with our own eyes. To see such excellent organization by the youth only strengthens the fact that a bright future lies ahead and words can hardly express the responsibility assumed by the young generation in the rebuilding and development of the Homeland. The strong will and sentiment of Eritreans is another thing. You feel bad knowing that many people remained outside due to lack of space. Despite having come from afar for the event, they didn’t complain or resort to going back home when they were told to remain outside. Instead, they made the best of the situation and built on an already successful event and this was a manifestation of the people’s consciousness and magnanimity. I say they deserve to be given a second chance.

Bigger halls could have been found but the fact that it was a Sunday didn’t work in favor. So for the future, organizers should learn from this experience and ensure bigger venues for similar events. And to those who remained outside for the duration of the seminar, I would like to say that they “taught all a lesson.”