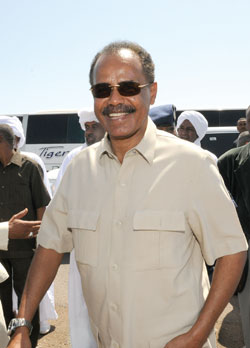 The President was given send off at the border spot of Arbatasher by Sudanese government officials including, the Administrative of Kassala region, Mr. Mohammed Yusuf.

In the third-round meeting in Khartoum with Sudanese President Omar Hassen Al-Beshir, the two leaders held discussion on various issues aimed at reinforcing economic partnership and the measures that need to be taken to implement the agreements concluded, as well as the necessary integrated stance towards ensuring peace and stability in the Horn region.

It is to be recalled that during the talks that the two leaders held earlier focusing on strengthening bilateral relations in all sectors, they noted that the new land route linking the two countries would make due contribution as regards the movement of nationals of both countries and trade activities.

Moreover, the President visited the modern private hospital on October 20, during which he underlined the need for fostering close cooperation with Eritrean health institutions on the part of such a hospital equipped with advanced medical facilities.

He also visited two dams in Feshega sub-zone which are under construction, during which he told reporters that the project would make major contribution to socio- economic development. In addition, President Isaias received briefings by heads of agricultural and animal breeding plants in the course of a visit to Al-Elefon area.  He also visited the Merewi dam in the northern Sudanese region and a museum in Merewi town. The President pointed out the dam would make major contribution in the development of close economic ties.

Bee breeders in Fishe-Mirara to strive for higher output