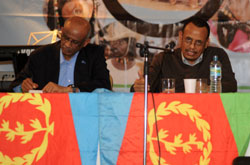 Eritrea festival in Britain that was underway as of October 21 concluded colorfully.

Asmara, 24 October 2011 – Eritrea festival in Britain that was underway as of October 21 concluded colorfully.

During the two-day festival, seminar, photo exhibition, general knowledge contest, cultural and sports activities, as well as others activities featured, and that nationals of different age and Friends of Eritrea participated in the event.

In a seminar he conducted regarding the objective situation in the Homeland Mr. Zemhret Yohannes, Head of Research and Documentation at the PFDJ, pointed out that a nation’s economic development is measured by clear vision and capable leadership. He further explained that in the last 20 years of independence, vigorous efforts have been exerted to promote the interest of the county and its people, and that promising achievements have been registered thanks to the clear vision, committed leadership and strong organization.

Moreover, Mr. Zemhret indicated that solid foundation has been laid for strong socio-economic development that has borne gratifying outcome. He also commended the participation of Eritreans inside the country and abroad in diverse domains regarding the nation-building process.

Program to distribute sweet potatoes being stepped up in Dubarwa town