Program to distribute sweet potatoes being stepped up in Dubarwa town 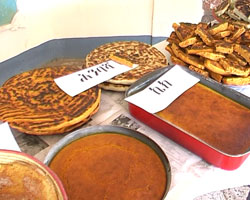 A program to familiarize and distribute 5 types of sweet potatoes following 5-year research is being stepped up in Dubarwa town.

Dubarwa, 24 October 2011 – A program to familiarize and distribute 5 types of sweet potatoes following 5-year research is being stepped up in Dubarwa town.

The Minister of Agriculture, Mr. Arafaine Berhe, underscored the paramount role of farmers in achieving food security, and commended the farming community in Mendefera for their dedication in making use of sweet potatoes and their distribution. He further called on them to produce sweet potatoes, and on agricultural experts to exert more efforts to promote wide distribution.

Likewise, the Minister of Tourism, Ms. Askalu Menkorios, said that training programs would be organized so as to popularize sweet potatoes among service -rendering enterprises.

The Administrator of the Southern region, Mr. Mustafa Nurhussen, equally pointed out that the select seeds and dairy cattle already distributed to farmers are bearing fruitful outcome. He also expressed conviction that the distribution of sweet potatoes both as food item for human and a means of animal feed would be widely put to use.

The head of Agriculture Ministry branch office in the region, Mr. Bahta Tedros, explained on his part that sweet potatoes have been planted in the sub-zones of Dekemhare, Dubarwa and Mendefera, and have gained wide acceptance by farming communities in the area.

According to reports, sweet potatoes could be planted in all parts of the country, and that it is possible to harvest 450 to 680 quintals per hectare.