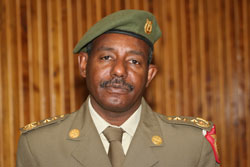 In a speech he delivered at the graduation ceremony of members of the Reserve Army Command, Gen. Sebhat noted that there exist enemies targeting our unity with a view to exploiting the nation’s resources, their dreams ended up in utter failure thanks to the Government’s correct policy and the courageous Eritrean people.

Stating that Eritrean nationals inside the country and abroad in general and the youth in particular are registering enduring history, the Defence Minister pointed out that the country is achieving significant victories in the national drive for economic emancipation thanks to the pursuit of correct policy to this end.

Underscoring that one’s contribution to the nation constitutes a personal pride; he explained that Eritrean youths are on the path of solid progress through their dedicated endeavors in the nation-building process.
Stating that at a time when the nation is undertaking significant initiatives towards fostering political, economic and diplomatic ties, Gen. Sebhat called on the youth to enhance their efforts so as to reinforce the ongoing investment drive aimed at ensuring that our natural resources serve the country and the people.