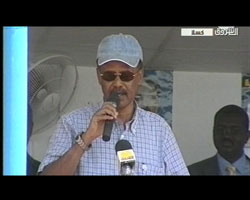 Speaking on the occasion, President Isaias congratulated the people of Sudan and their leadership in general and the inhabitants of Kassala region in particular. He also expressed appreciation for the Emir of Qatar for his leading role in our region and the world at large, as well as his contribution towards promoting stability and development in Sudan. “The ceremony we are presently attending attests to the outcome of such contribution,” Present Isaias elaborated.

Moreover, he expressed conviction that the implementation of development programs in Eastern Sudan would be a solid bridge for strengthening ties between the people of Eritrea and Sudan. In addition, the President wished the people of Kassala region development and prosperity.

Likewise, President Omar Hassan Al-Bashir declared: “Fighter Isaias Afwerki lived amongst you, among the people of Kassala, enduring hardship and struggled for the liberation of his country. And now together with you, he is celebrating your development.”

The Sudanese leader further explained that Eritrean-Sudanese relations is not only people-based but has also cultural roots, besides being exemplary. He also underlined that the asphalt road constructed with Qatari assistance would have major impact in strengthening the multi-faceted relations between the two peoples.

Furthermore, in a speech he delivered on the occasion, the Administrator of Kassala region, Mr. Mohammed Yusuf Adem, expressed appreciation for the contribution of the people and Government of Eritrea under the leadership of President Isaias for concluding the peace agreement between East Sudan Front and the Government of Sudan. In this regard, he said: “The role of the people and Government of Eritrea occupies a special place in the heart of every Sudanese national.”

The Arbatasher-Kassala road was part of the development program for Eastern Sudan region in line with the peace agreement concluded in Asmara in October 2006 between the Government of Sudan and the East Sudan Front. The project was also funded by the State of Qatar.