Eritrea: The Next Big Thing 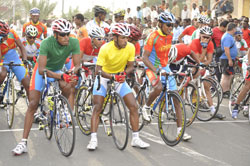 It is to be recalled that Eritrea dominated last year’s African Cycling Continental Championship held in Rwanda winning individual time trial, individual road race, which ensured Eritrea’s participation in the upcoming London Olympics 2012 and also team trial championship. Depicting these achievements many sports magazines put Eritrea as Africa’s cycling powerhouse. Witnessing these all victories in cycling, one of the famous magazines, Procycling magazine, published an article written by Pierre Carrey, on its April 2011 edition under the title: ‘Eritrea: the Next Big thing?’. On the occasion of the next Africa’s Cycling Continental championships that will be held in Eritrea after two weeks from the 8th to 13th of November 2011, here is excerpts of the article published in the Magazine.

On 30 January, a historic moment in world cycling occurred at the Tropicale Amissa Bongo race in Gabon. During the last stage of the traditionally gentle season opening event, an mature rider from sub- Saharan Africa defeated an experienced professional. It was perhaps even an inaugural entry in road cycling’s annals. Just after the last corner, Eritrean riders Natnael Berhane launched an inextinguishable sprint that Quick step’s fast finishers Jerome Pineau couldn’t match.

While his arrival, 10 years his junior, was being carried by the crowed in the streets of Libreville, Pineau was gracious in defeat. “Either we play the game by coming here and taking the risk to be beaten or we stay at home….” He said. “I am even very happy to be defeated by an Eritrean rider. That’s a nice symbol” The chances are good that the next black African cyclist to ride the Tour de France will be Eritrean. It’s mostly a question of when. It certainly won’t be longer than 10 years because this East African country is rapidly marking its place on the map of cycling nations.Could Eritrean riders match the level of the Colombians in the 80s, who set the famous climbs ablaze, jostled with the favorites and captured stage and polka-dot jerseys?

The current generation of Eritrean arouses the curiosity of professional teams. Quick step and Europcar are following Berhane closely. He will get a taste of European racing this year through the UCI World Cycling Centre in Switzerland. Along with team type 1 from the US, they’re also keeping an eye on Daniel Tekelhaymanot, another Eritrean winner in Gabon, who beat South African Reinardt Janse Van Rensburg on stage 4 at the Tropicale Amissa Bongo race in Gabon. These pro transfers may even happen as early as the end of 2011 with stagiaire contracts.

Amateur teams are also chasing the country’s riders. Pendragon Sports, a British club in the first division, announced the new addition of Haile Dawit last February, a stage winner in the 2010 Tour of Libya. “We’ve really got too many good riders,” says the president of Eritrea’s cycling federation, Tesfai Beri, almost complaining. “That’s a headache when composing a national team……” Certainly, the nation is cycling mad. Hysteria grips spectators at the Tour of Eritrea every year, which has become the most popular event in the country since its return in 2001 after a 50- year hiatus. Teklehaymanot is the country’s most famous cyclist and probably one of the famous Eritrean celebrities too. He’s also a symbol of his compatriots’ talent and sacrifices. The youngest child of 11, he started mountain biking at the age of 12. He’s 190cm tall very slender in appearance, impetuous in the toughest ascents but fragile. Since 2006, the Eritrean team leader has been focused on cycling, which means he has stopped helping out on the family farm. However, he still lives there, sharing his father’s room.

He’s seen success too. In 2008, Teklehaymanot was fifth in the professional Tour Ivoirien de la Paix, held in Ivory Coast, placing ahead of Nicolas Roche. The year after, he joined the UCI World Cycling Center but had to stay off the bike for several months to receive open-heart surgery for tachycardia-his heart was racing at an unhealthy 320bpm. Even so, in September that year he placed sixth overall in the Tour de I’Avenir. And in June 2010, he won a stage in the U23 Nations Cup event in Saguenay, Canada. Teklehaymanot had to confirm his domination in Africa too. He did so last November, prevailing in the individual time trial and the road race in the individual time trial and the road race in the Continental Championships-ensuring his nation’s participation in the 2012 Olympic Games-then capturing the overall victory in the hilly Tour of Rwanda. Eritrea’s national riders also saw success in the team time trial championships, beating South Africa by 2:19, and won three out of nine stages at the Tour of Rwanda, putting five riders in the final top 10.

This means two African nations long credited as the best on the continent, Morocco and South Africa, have been overtaken. The Moroccan pros, paid about €1,500 a month by their federation, tried to explain their rout by citing unusually late training and the bad effects of altitude. But they won six stages in eight and the GC on the same parcours in 2009. It seems there’s a new hierarchy in Africa’s cycling nations. When they flew back home, the Eritreans were welcomed as heroes. “It’s already common that people take you on their shoulders when you win a race,” Berhane tells Procycling. But after the Tour of Rwanda, the celebration was unbelievable. The riders were paraded on white Mercedes limousines while they waved to a massive public. State television sent a helicopter for aerial shots. One week later, the President of the state of Eritrea, Isaias Afewerki, hosted the team for dinner at the Hotel Asmara Palace. Such scenes of jubilation evoke the memory of the one million-strong guard of honor who paid tribute to Colombian Alfonso Florez in 1980 after his victory in the Tour de I’Avenir. Eritrea and Columbia have much in common, notably altitude. The former’s capital, Asmara, is built at 2,340m. That’s 300m lower than the first city of Columbia, Bogotá, but still as high as the Izoard, one of the most famous Tour de France Mountains. A typical stage of the Tour of Eritrea starts from the Red Sea and finishes at altitude, where most of the riders live. Teklehaymanot confirms that, like the Colombians, they are born climbers: “I love to climb. The longer the passes are, such as in the Alps, the better I feel.” Altitude is Eritrean riders’ natural advantage. “Their blood oxygen saturation and lactate levels are monitored regularly along with their heart rate data. They compare well to highly trained European professionals,” explains Radek Valenta, an Australian coach who trained the national team for three months in 2009. What’s the true potential of Eritrean cyclists if they turn professional and start competing on the world stage? Michel Thèze, Teklehaymanot’s coach at the World Cycling Centre, says he could be a “very strong climber and time triallist, good in the stage races thanks to his recovery skills”.

However, Thèze adds: “Daniel has to be more focused during the races. Up until now, he’s been so powerful that he makes the decision whenever he likes but later, he’ll need to be very careful and well positioned in the peloton. In fact, his career depends a lot on the team he goes to. They have to be patient with him.” By contrast, the 21-yearold Berhane, who brought down Pineau in Gabon, “is more of an all-rounder,” says Jean-Pierre Van Zyl, the manager of the UCI Continental Cycling Centre in Johannesburg, South Africa. “He’s perfect on the flat, mountains and also in small sprints.”

We can also get a good idea of Eritreans’ adaptation to the European level through two riders who competed in 2003 for Marco Polo, a Chinese-Dutch team that’s always looking for athletes in non-cycling-centric countries. That season, Habte Weldesimon and Ephrem Tewelde rode impressively in the Ster Elektrotoer, facing teams such as Gerolsteiner and Fassa Bortolo. “On the main stage, in the Belgian Ardennes, they were both in the main peloton with 40-odd riders,” recalls their former directeur sportif Gudo Kramer. But cycling is a fickle sport: “Everything changed in one descent, when one was dropped and the other one punctured….” Historically, it was Europeans who brought cycling to Africa, as they did in Colombia. For Eritrea, cycling is part of its Italian colonial heritage. The winner of the first Giro dell’Eritrea in 1946 was Italian. The capital of Asmara bears the hallmarks of its Italian past, including subtle neo-classical architectural and the ritual of passeggiata, or taking a genteel evening stroll, and a love for chatting with friends over a cappuccino.

Riders enjoy this relative dolce vita in the capital; away from the infamous coast where summer temperature can hit 500 C, forcing some of Massawa City’s population to sleep in the streets.

In 2010, Eritrean President Isaias Afwerki announced he’d give each rider who was part of the team’s Rwandan success a prize of 100,000 Nakfas (about €5,200). In 2009, the national cycling federation also bought expensive Trek bikes in order to have some of the best equipment in Africa. All in all, Eritrean cyclists are a group worth watching. After all, they’re born in a country that would be a riding paradise if it weren’t for the ravages of war and the difficulties of its political situation in the region. What’s more, Eritrea’s neighboring countries are following the examples set by Eritrea’s riders. Teklehaymanot and Berhane told us they dream of riding the Tour de France and both seem to have the perfect skills for that race. Behind them a whole generation is ready to do battle in Europe.