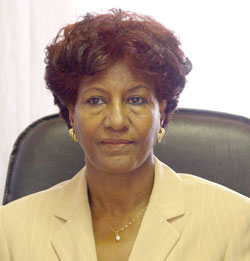 Ms. Askalu Menkerios, Minister of Tourism, called on unified efforts on the part of service-rendering institutions in order to develop the tourism sector.

Tesenei, 28 0ct0ber 2011- Ms. Askalu Menkerios, Minister of Tourism, called on unified efforts on the part of service-rendering institutions in order to develop the tourism sector.

In a two day workshop conducted in Tesenei under the theme “Coordinated Services for Development of Tourism,” Ms. Askalu indicated that the nation’s tourism sector has not yet developed as expected and that currently efforts are being exerted to change and improve such state of affairs.

The Minister further noted that tourism has a substantial role in income generation and the beauty of surroundings, and that the sector has been confined to urban areas only due to lack of people’s awareness also called for radical change to foster local tourism.

Ms. Askalu indicated that the big government economic projects in Gash Barka region are creating substantial job opportunities, and that the strengthening of provision of services based on our culture of hospitability, clean, speedy and in a humble way by the service rendering institutions will have a major impact on the development of tourism sector.

Similarly Mr. Musa Rab’a, Administrator of Gash Barka, region said that culture itself embodies tourism attraction and indicated that the workshop will have a driving force in the development of tourism in the region.
Different papers regarding the tourism sector were presented at the workshop and the participants conducted discussion.

The participants on their part called for continuous inspection and follow up of service rendering institutions, increase tax collection offices and organize training for employees so as to promote improved services.

Beneficiaries express satisfaction with the completion of Arbateasher-Kassala road