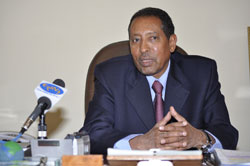 The agreement was signed by the Minster of Energy and Mines, Mr. Ahmed Haj Ali, and the Chairman of the Board of Directors of Zara Mining Company, Mr. Thimothy Gorder .

Speaking on the occasion, Mr. Ahmed Haji Ali said that recently Bisha managed to develop and commence commercial production, while Sundridge is doing pre-feasibility and feasibility studies for the Asmara project, and South Boulder Mines announced the completion of a scoping study for the Colluli potash deposit. The Minster further explained that the signing of the latest agreement for a Zara mine is a wonderful and important addition to mining sector in the country.

The Chairman of the Board of Directors in Zara Mining Company, Mr. Thimothy Gorder, said that given the significant progress already made and the strong support afforded to the project by the Eritrean government, construction will get underway in the first half of next year. Gold production is also targeted to commence in late 2013.